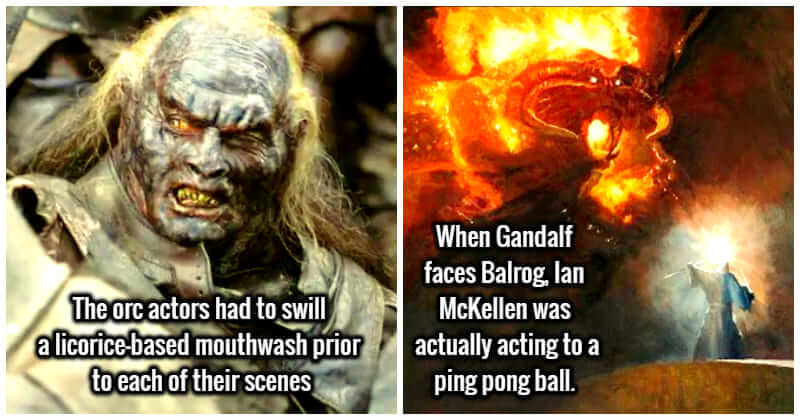 Some of the finest sequences in films aren’t even in the script, and there are many of them in The Lord of the Rings films. Several movie franchises are as large and diverse as Peter Jackson’s adaptations of J.R.R. Tolkien’s great writings, so there’s lots of behind-the-scenes information to discover about these ground-breaking masterpieces.

It’s often the small details that make a film not only unique, also everlasting. The creation of The Lord of the Rings films revolutionized movies and Hollywood forever, whether onstage or behind the scenes, and there are a plethora of intriguing BTS facts to learn about The Lord of the Rings franchise. This Lord of the Rings trivia facts compilation is for you if you want to one-up your peers in your next nerdy chat or win at your next quiz event. Check out the list below for some fun LOTR trivia!

#2 Christopher Lee read The Lord of the Rings once a year beginning in 1954, the year it was published. He was also the only member of the cast to have met J.R.R. Tolkien. #3 Sean Bean (Boromir) was afraid of flying. When they were shooting the scenes crossing the snowy mountains, he’d spend two hours every morning climbing the mountain to the set, dressed as Boromir. #4 Mortensen did his own stunts and insisted on only using a real steel sword, instead of significantly lighter aluminum swords or safer rubber swords #5 John Rhys-Davies (Gimli) also voices Treebeard. It was achieved by having the actor speak at the lowest pitch possible, through a wooden megaphone. #6 Viggo Mortensen was so impressed with the horse his character rides in the series that he purchased it from the owners. #7 In order to show the huge importance and weight of the One Ring, the floor was built to be magnetic so that when Bilbo dropped the ring, it wouldn’t bounce. #8 The main door to Helm’s Deep was built so heavily and so well that the real battering ram that was built to knock down the gates failed to do so until the door was weakened.

#10 During the Council of Elrond, the art department had to collect sacks of leaves during autumn, and every single one of those leaves had to be individually painted to provide the background for the scene.

#11 When the dragon firework goes off at the party, the shriek heard is Billy Boyd actually screaming, as he was unaware at the time that the firework was really going to explode on set #12 Cast members were given a gift on their last day of shooting – usually, a prop that was significant to their role. Miranda Otto received one of Eowyn’s dresses and her sword, Liv Tyler received Arwen’s “dying dress,” and Orlando Bloom got one of Legolas’s bows. #13 The orc blacksmiths shown beneath Isengard in The Fellowship of the Ring are actually the WETA Workshop staff, who made the weapons used in the films.

#14 When Christopher Lee and J.R.R. Tolkien were in correspondence, Tolkien gave Lee his blessing to play Gandalf if there ever was a film version of Lord of the Rings. But he was offered the part of Saruman instead. #18 As the orcs have black blood, it was only natural that the inside of their mouths should not be pink but black as well. To achieve this, the orc actors had to swill a licorice-based mouthwash prior to each of their scenes. #19 For the scene in which Frodo gets pierced by Shelob, Elijah Wood had two Alka-Seltzers hidden under his tongue, which he chewed up to create white foam. The foam then leaked out of the corner of his mouth.

#20 In The Two Towers, when Frodo and Sam are in Osgiliath, Sam says, “By rights, we shouldn’t even be here.” This was a nod to a deviation between the book and the screenplay. In the book, Sam and Frodo never passed through Osgiliath at all. #22 Originally Liv Tyler’s character, Arwen, was to be included in the fighting force of elves who join the men in the battle of Helm’s Deep. This eventually met with fan fury on the Internet with its inconsiderate approach to Tolkien’s work. #24 The “subsurface scattering” technique was developed for the creation of Gollum, allowed the 3D artists to simulate light casting into objects and bouncing around underneath the surface and cast back out again #25 When Gandalf had his big stand-off scene with the Balrog, Ian McKellen was actually acting to a ping pong ball. #26 While Frodo is stabbed by Shelob’s stinger, Elijah Wood was actually stabbed with a prop. He and Sean Astin comment that it was very painful, to the point that Wood had to stay in the hospital for a couple of days

#27 Gollum’s pupils signal his mood. “Treacherous Gollum” has narrow pupils; “Friendly Gollum” has slightly wider pupils. This is most obvious in the scene when the two sides of his personality struggle with each other in The Two Towers.

#28 In The Two Towers when Gollum spits in disgust at Sam’s cooking of rabbits, that is Andy Serkis’s very own spittle flying through the air. Serkis lists that scene as his favorite from all three films.

#29 The four actors playing the young hobbits would have to go into makeup at 5 am and stand for an hour and a half while their prosthetic feet were being applied.