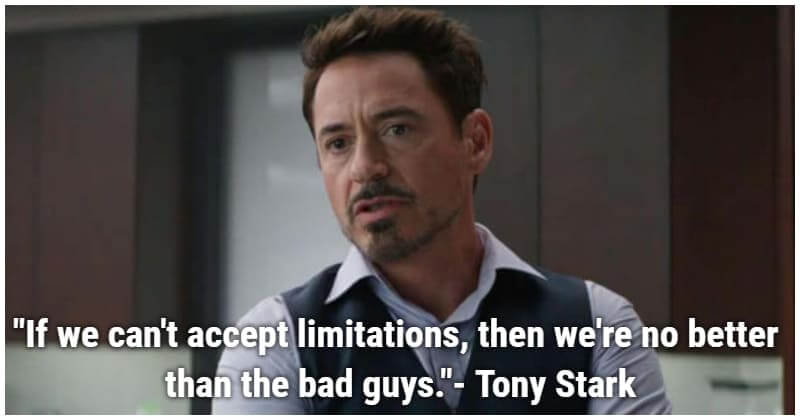 Superheroes may be only fictional, however, the stories behind them often capture essential truths about our human nature. Kids love superheroes because they are cool with incredible superpowers. And adults love watching them because they often come with meaningful lessons from problems and dilemmas that they face.

In addition, superhero films and stories are exceptional sources of inspiring quotes. Besides being entertaining, they’re often full of motivation. If you are in times of doubt and darkness, you may need this – a collection of inspiring marvel quotes from across the universe. Let’s enjoy it!

#1 Peggy Carter’s words spoken by Sharon Carter: Compromise where you can. Where you can’t, don’t. Even if everyone is telling you that something wrong is something right. Even if the whole world is telling you to move, it is your duty to plant yourself like a tree, look them in the eye, and say ‘No, you move.’ #3  T’Challa: But in times of crisis, the wise build bridges, while the foolish build barriers. We must find a way to look after one another as if we were one single tribe. #4 Frigga: Everyone fails at who they are supposed to be, Thor. The measure of a person, of a hero…is how well they succeed at being who they are. #7 Tony Stark: It’s not enough to be against something. You have to be for something better. #8 Dr. Abraham Erskine: Whatever happens tomorrow, you must promise me one thing. That you will stay who you are, not a perfect soldier, but a good man.

#9 Vision: But a thing isn’t beautiful because it lasts. It’s a privilege to be among them. #13 Erik Killmonger: Just bury me in the ocean with my ancestors that jumped from the ships, because they knew death was better than bondage. #14 Peter Parker: I’ve been me my whole life, and I’ve had these powers for 6 months. I read books, I build computers… and yeah, I would love to play football, but I couldn’t then so I shouldn’t now.

Tony Stark: Sure: Cause, you’re different.

#15 Tony Stark: If we can’t protect the earth, you can be damn well sure we’ll avenge it!

#16 Tony Stark: If we can’t accept limitations, then we’re no better than the bad guys.

#17 Vision: What is grief, if not love persevering?

#18 Odin Borson: Asgard is not a place. Never was. This could be Asgard. Asgard is where our people stand.

#19 Steve Rogers: Whatever It Takes…

#20 Carol Danvers: I have nothing to prove to you.

#21 Tony Stark: No amount of money ever bought a second of time.

#23 T’Challa: Today we don’t fight for one life, we fight for all of them.

#24 Thor Odinson: I would rather be a good man than a great king.

#25 Peggy Carter: The world has changed and none of us can go back. All we can do is our best, and sometimes the best that we can do is to start over.