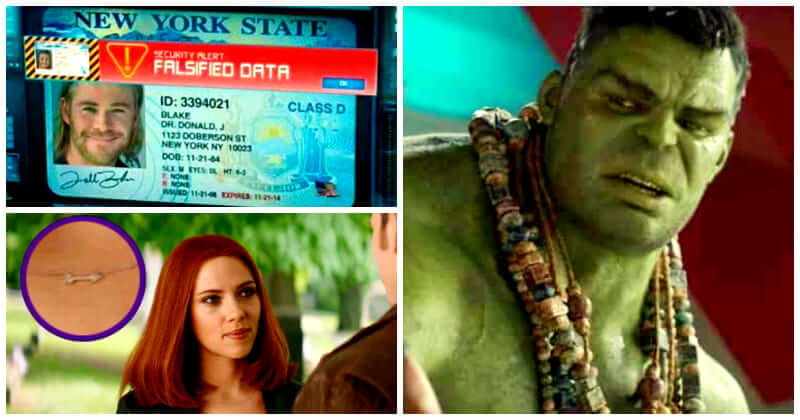 It’s been more than a decade since the first Iron Man film launched the Marvel Cinematic Universe, and there’s no indication of it easing down in the near future. With the release of Black Widow, it marks what might be the final theatrical appearance for any of the original Avengers, who originally came together in 2012’s film of the same name.

Looking back, it’s amazing how many minor things are integrated into each of the original Avengers performances and set pieces to give them that extra something. This is a compilation of minor tidbits about the original Avengers that make us miss them. Share with us the facts you missed while watching Marvel’s Avengers.

#1 Iron Man 2′ Hinted At Captain Marvel, Ant-Man, And The Existence Of Mutants #2 The Hulk’s Language Barrier Starts To Disappear In ‘Ragnarok’ Thor and the Hulk spar in 2017’s Thor: Ragnarok. Instead of calling himself “Hulk” after Thor apologizes, Hulk adds, “I just get so angry all the time,” demonstrating how Thor’s fellowship brings out Hulk’s human aspect. In the Mcu, this is the only occasion Hulk says “I.” Black Widow is shown wearing an arrow necklace in Captain America: The Winter Soldier (2014), a tribute to her strong relationship with Hawkeye. Even though Hawkeye is firing a rifle at Maria Hill in The Avengers (2012), he postures his torso with his shoulder blades far back, just as if he were discharging a bow and arrow. The classic ‘cup and saucer’ strategy is used by almost every other S.H.I.E.L.D agent in the movie.

#5 He Calls Himself “Hawkeye” For A Reason

In Avengers: Age of Ultron the archery target in Hawkeye’s barn only has hits in the center. In Avengers: Age of Ultron and part of Thor: Ragnarok, Thor has a strand of Loki’s hair braided into his own to honor his fallen brother. You can see scar tissue on Tony Stark’s chest where the Arc reactor was removed in Iron Man 3.

#9 Thor’s Fake ID Is A Nod To The Comics In Thor (2011), Dr. Selvig created a fake ID for Thor using the photo Darcy took of him at breakfast. The name Selvig used for Thor’s ID, Dr. Donald J Blake, is Thor’s human alter ego from the comics.

#10 Natasha Took Up Ballet Again After The Snap In Avengers: Endgame (2019), a pair of pointe shoes (used in ballet) sit upon a chair near Black Widow, a reference to her origin story and presumably her attempt at coping with the losses endured in Infinity War.

#11 While Getting Shawarma, Chris Evans Had To Cover His ‘Snowpiercer’ Beard Cap (Chris Evans) is seen resting his face on his hand and not eating anything in The Avengers post-credits sequence at the shawarma booth. This is due to the fact that the sequence was shot too late (after the premiere) and Evans had grown a beard while working on Snowpiercer. In Avengers: Endgame (2019), when Black Widow falls, Hawkeye briefly looks away, as due to his enhanced far-sightedness, he didn’t want to see her hit the ground.

#13 Captain America Is Steadfast In His Values

In Captain America: Civil War prior to the Sokovia Accords, Steve has his Avengers logo [on his uniform], but later at the airport scene you can see he removed it. They fall through the ceiling in front of Pepper and the still-undercover Natasha Romanoff during the Rhodes/Tony fight in Iron Man 2. Rather of reacting to her fear like Pepper does, she back-steps into a combat position, almost revealing her identity. In Iron Man (2008) the music that plays in the casino is actually the opening music of the original 1966 Iron Man cartoon.

#17 Banner-Hulk Needs To Compensate For His Loss Of Dexterity In Avengers: Endgame (2019), Hulk uses a pencil to flick the switches in the scene where they are trying to send Scott back in time, because his fingers are too big. In Avengers: Age of Ultron, Tony alludes to the Hulkbuster armor in an earlier scene as “Veronica.” This is because Bruce Banner’s girlfriend in The Incredible Hulk is named Betty Ross; a nod to the classic Archie comics characters.