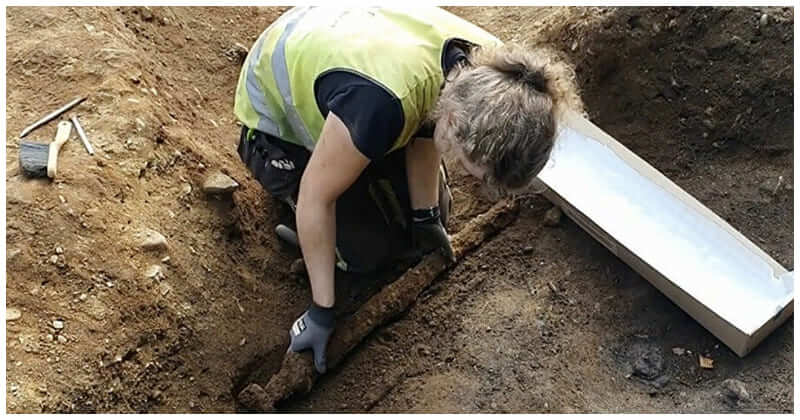 Norwegian archaeologists have recently carried out excavations in Vinjeøra, Norway, only to find a group of 9th-to-10th-century Viking tombs, involving one with strange layout, indicating that the remnants inside once belonged to a left-handed warrior. The reason is, while the majority of weapons discovered in Viking cemetery are placed on the right side of the grave, this dude’s sword is on his left, according to archaeologists George Dvorsky.

When battling, Vikings warriors would hold their sword in one hand and wield the shield on the other. Right-handed fighters kept their scabbard, or sheath, hanging on the left side to facilitate reaching across and pulling out their blade.

The Vikings warriors would often be entombed with their sword and sheath on the right side in a reversal of how they had appeared in real life, when they died. Raymond Sauvage, an archaeologist at the Norwegian University of Science and Technology (NTNU) who led the excavation, revealed, “The idea is that this placement must reflect some beliefs that were important in the mortuary rites.”

“Other [Viking] items are often found to be placed mirrored of what is normal. Several archaeologists therefore believe that this may reflect a belief that they understood the afterlife to be mirrored of the normal world,” he continued.

Experts from NTNU also stated that the area ahead of expansion of a highway is being unearthed, and until now, there have been discoveries of overlapping cemetery of numerous soldiers, including the previously assumed left-handed one, and another grave believed to be of an early Viking female.

The gender identification was determined upon the discovery of items including an oval brooch, a pair of scissors and several colored beads. Altogether, the woman’s cremated remnants was only 4 lbs. in weight. Most Iron Age graves hold only half a pound of material. Currently, the discrepancy has no clear answer. The warriors in question were laid to rest in a large ditch encircling a mutual burial mound. “It was obviously important to lie next to or in the burial mounds and the ring ditches around them,” claims Sauvage.

He adds, “We can imagine that this burial practice is an expression of how important the family’s ancestors were on a farm in Viking times. … This confirmed the family’s ownership of the land, and being buried close to an important ancestor or forefather (or -mother) was perhaps also a way to be included in the community of ancestral spirits.”

The Vikings were confident that it was of great significance to be sacredly linked with their predecessors. According to Sauvage, the living Vikings ascertained the dead remaind present, both physically and as companion spirits called fylgjur, by interring loved ones in a burial mound on the household plantation.

The artifacts found within the burial of the left-handed warrior involved mostly weaponry: axe, spear, shield and sword. In the Middle Ages, most Vikings soldiers, who are actually farmers, were required by law to procure these weapons, beginning with the axe and shield. The 1,100-year-old sword found in the burial is greatly corroded and measures roughly 3 ft. long.

“I’m a little surprised at how heavy it was,” says archaeologist Astrid Kviseth. “I don’t exactly know how heavy a sword is, but it had some heft to it. You would have had to be pretty strong to be able to swing this sword.”

The hypothesis is that the warrior probably wore the sheath on his right side while holding the sword in his left hand in combat.

The individuals’ gender and age will be identified by further research on the relics and remnants. Meanwhile, the left-handed warrior’s sword will be conserved in the university’s lab, where experts would conduct X-ray analysis to find out what lies more beneath 1,100 years’ worth of rust.

What Is NNN On Tiktok? No Nut November Rules 2022

Does Angelina Die In Manifest? What Happened To Angelina?