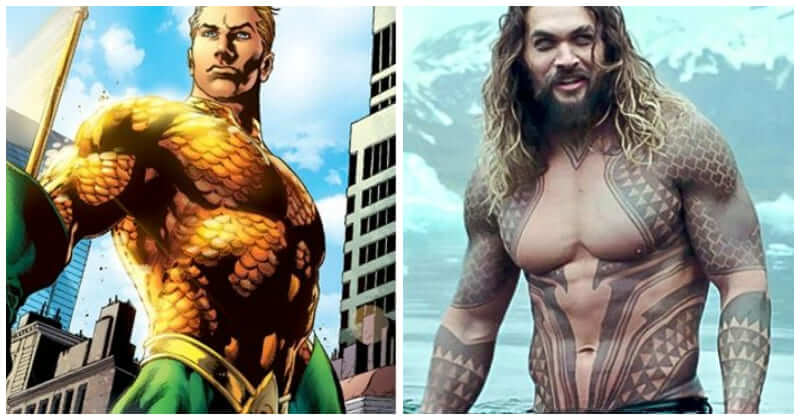 Who doesn’t love superheroes, especially Marvel and DC superheroes? Marvel and DC heroes have always been famous for their outstanding looks and admirable superpowers. Through their movies, which have amazing effects and attractive content, these superheroes have amassed a huge number of fans around the world. However, their movie looks aren’t quite what they look like in the comics that not everyone knows, even their avid fans.

Those who have read the comics and watched the movies may feel disappointed with the appearance of heroes and villains on the big screens. Why? Because they are not loyal to the comic book. In this post, we will show you the difference between heroes in movies and heroes in comics. Don’t skip this post if you want to see the real figures of your favorite heroes!

#1 If Aquaman was a comic character! This artist transforms Aquaman into a unique and different figure. He keeps his hair short and blond, and he had orange scales all over his chest and green spandex. While no one would object to seeing Jason Momoa half-naked and tattooed, those are not fish scales on his body! Rogue is portrayed in the comics as a middle-aged woman with a white fringe and a fearless attitude toward life. She is one of the main characters in X-Men, wearing the iconic yellow-green uniform. However, in the movies, not only has her appearance changed but her powers and overall mindset also changed. Starlord, a.k.a. Peter Quill, appears in the movies in a significantly different manner from his appearance and story in the comics. Peter was the first “guardian” before the rest of the squad was put together. He was a square-jawed cop who was blond and skinnier than Chris Pratt. With its bright green color and hood, the original character’s appearance was a nod to Robin Hood. The creators of the TV show, on the other hand, went so far as to add armor to the costume, turning it a dull green color. They also added shoulder pads in this new look. Jewel appeared when Jessica Jones first got to test her powers. Pink-haired, light, and bubbly, she aspired to protect the world and was kidnapped by Killgrave. Despite the homage to her costume, Jessica Jones on TV is a dark character who usually wears plain black tees and jeans. Preacher’s main female character is supposed to be a small, toned, fierce little blonde. However, casting was given to Ruth Negga, who is quite the opposite in appearance and is also dressed in a less sexy manner. However, we must admit that she added a new look to the role. The character of The Owl underwent the most dramatic transformations in appearance. In the comic version, he looks like a Wolverine with the same bright orange hairdo and a long green coat. However, in the TV show “The Owl”, he looks more like a businessman. Beast was much more clothed in films than in comic books, with changes to his height, appearance, and powers, as well as changes to the original story. It took several generations of Superman films to include red underwear beneath the suit. DC also changed the suit’s color scheme, making it more scale-like and leathery. Killgrave’s purple-skinned, white-haired villain was changed to blend in with the Jessica Jones series. However, the creators decided to dress him in a purple suit to emphasize his comic book backstory.

#11 How can we forget Scarlet! Scarlet Witch is older and more mature in the books, and she usually appears in an incredibly sexy suit, cloak, and headpiece that helps her govern her powers. In the films, this character is more covered and dressed more casually. Daredevil’s bright red leather costume is a trademark of the character. However, the TV show’s creators decided to dress the vigilante in plain black clothing and a plain mask to show how the personality evolved into the superhero. In comic books, Quicksilver usually wears a green or blue suit with a silver flash on the chest. However, it was replaced with a bluish-gray shirt with more texture and less spandex. Quicksilver in the movies is also larger and younger in appearance. Kingpin was not only a big bald guy, but he was also very “fashion-forward” with his flashy white suit and colorful neck scarf. Unfortunately, this image was shattered by a tame version of the villain played by Vincent D’Onofrio. In the world of comic books, this red-skinned alien wears a green bodysuit and a yellow cloak. However, the movie’s creators gave him a more armored appearance and a beige cloak, making him more of a tech-supporting creature. They also included a metallic ornament that was not found in the books.