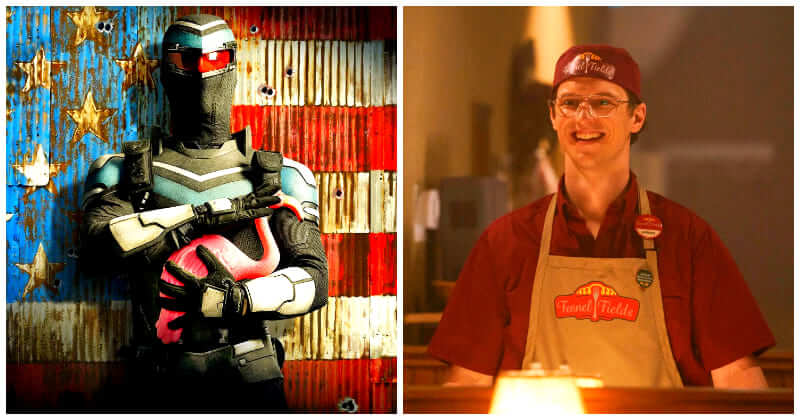 When you keep track of how many wonderful things British actor Freddie Stroma mentions in this conversation about his Peacemaker co-star John Cena and the series’s creator/director/writer James Gunn, you’ll think “Hey, this Stroma fellow’s a very nice guy” well before the conclusion. His gratitude for Peacemaker is real to the point of being childish, which is perhaps why he’s so wonderful as Vigilante.

Considering Adrain Chase’s complete lack of guilt for murdering those he deems to be evil folks; the adorable psychopath exudes a naive sweetness. We had to chat to Strona about the part since Vigilante is the series’s weirdest and most interesting personality. Rob Bricken, Interviewer: You were recast in the role when the show was midway through filming. Did you feel any pressure, since you were at the heart of five episodes of reshoots?

Freddie Stroma: It was it was a little scary at first because, you know, everyone’s been shooting for a few months together and everything’s underway. But as soon as I got there, John [Cena] was just so friendly and nice and good, He’s very good at improv, and James [Gunn] is great and it felt like a really easy fit from the first scene. From then on, any nerves just kind of melted away.

Interviewer: Vigilante is full of contradictions, yet he seems to have absolutely no idea they’re contradictions. Is that difficult to play, fun, or both?

Stroma: I think it to me is really fun. At the end of the day, James’ writing defines that character. And then when you’re acting, you get to come up with your own inner monologue and try to figure out what it is that Vigilante is really thinking. It’s very fun to play a character where you can create anything in your head and see how it fits in with everyone else.

Interviewer: Can you talk about Adrian’s interior monologue? How do you get into his… unique mindset?

Stroma: Honestly, it’s scene by scene. You have the general stuff that you think about, which is his relationship with [Cena’s character] Chris and what he thinks about being a superhero. And then you’ve got the crazy lines. Why does he want to know if [the Butterfly alien’s] favorite color is teal? You have to ignore the normal questions that people would ask like, because to him, that’s the most important and interesting thing to know. Interviewer: Well, can we talk about the glasses?

Stroma: They are quite amazing. That was James’s idea. When I got to set, he was said, “I’m thinking he should be wearing them all the time, like he needs them to see.” So we went with prescription [lenses] inside the visor [mask], so when his visor comes off, we made sure that his vision would be an issue. I think it’s episode seven when he’s driving the car and passing out, but then he takes off the mask and he needs to put his glasses straight on because he needs to see. It was a great choice.

Interviewer: It really is. It says so much about the character because he probably shouldn’t be doing superhero stuff while wearing glasses. But it never occurs to him that it’s a potential issue.

Stroma: Yeah, he could put in contact lenses, but instead he wears these Jeffrey Dahmer glasses to make his way around

Interviewer: I’ve got a theory. At one point, Adrian says he feels absolutely nothing about murdering bad guys, but later, he’s worried about hurting people by tying them up with tape. He knows racism is bad, but he’s unaware the term “Oriental” is problematic. He has no real emotions of his own, but I think he operates solely on data he’s been given through his life. Like, he’s had tape on his skin and knows it hurts when it’s taken off. Or someone told racism is bad, but they forgot to mention specific words.

Stroma: That’s pretty accurate. That’s a pretty good description of it, really, I like that.

Interviewer: So, for example, if he hadn’t grown up alongside Chris and he had different experiences or was told different things, he could be waging a war about hamburgers right now.

Stroma: Yeah, I wouldn’t be surprised. Yeah, he could have been the busboy from hell. He destroys every burger he sees. Interviewer: Do you think Adrian experiences emotional growth over the course of the season? Or is he the same person, start to finish?

Stroma: He’s pretty much the exact same person. I mean, he has a slight moment when he lets his identity be known by the team. So that could be something, but for the first few episodes, he’s absolutely adamant about nobody knowing his identity. But other than that, he’s pretty much the same from start to finish, which makes sense for what he represents to Chris.

Interviewer: You’ve mentioned the improvisation a lot. Were you and the other actors doing it, or did it mostly come from Gunn?

Stroma: We [actors] would get what’s on the page. And then James would just start just throwing out all these other lines. He’s very funny, and he’s actually a really good actor. So you feel like you’re improvising with James, and then you’ll be bouncing off each other when those lines come in. Then that might spark an idea to take it a step further. And then you’re doing this weird writing-improvising-acting thing in real-time because James will just keep the cameras rolling as we just keep throwing these things out there. That’s where a lot of the fun stuff comes from, really. It’s a really fun environment to be in when that happens. Interviewer: So much of the show’s dialogue is hilarious and crude it seems like the actors would constantly be busting into laughter during takes, which happens plenty of times in the gag reel. Was that a real problem?

Stroma: Oh, it was. It was definitely a problem for me. I’m terrible. If something’s funny, I will try my absolute hardest to make sure I don’t laugh so that we can capture the take and not ruin someone else’s take. But if something’s funny, I find it really hard to get out of the audience seat when I’m standing there and not crack up. So there are multiple times James would throw something out and then I’ll hold it for like a few seconds, but then I’ll just laugh as I’m saying it. John would also improv some really funny stuff.

There was one scene that I just could not [stop laughing at]… It was when he’s talking to Murn and Chris says, “If you don’t pass the test in school, what do you get?” And he says a “D” and then everyone else says “F” at the same time. And I remember reading that, thinking it’s so funny, I can’t wait to see that bit. Then they filmed it and I laughed so much. I was on the other end of the room and wasn’t on screen, so it didn’t really matter. Then James told John to say it again, but then slowly change his answer to copy them. They did that take maybe like 15 times because of all the different angles that they have to get, and every single time I just kept laughing, trying to do it as silently as possible.

Interviewer: I know you’ve done a million of these interviews about the show and Vigilante, but is there anything that you want more people to know?

Stroma: Oh god, I wish I could give you something good. I mean, I just thoroughly enjoyed playing him, and I do feel like half of the character really is James because of what he wrote and how he directed me because it was just such a collaboration. He’s just he’s so fantastic at writing and directing and storytelling. And I give a lot of credit to James, really. I don’t know if I’ve said that enough.