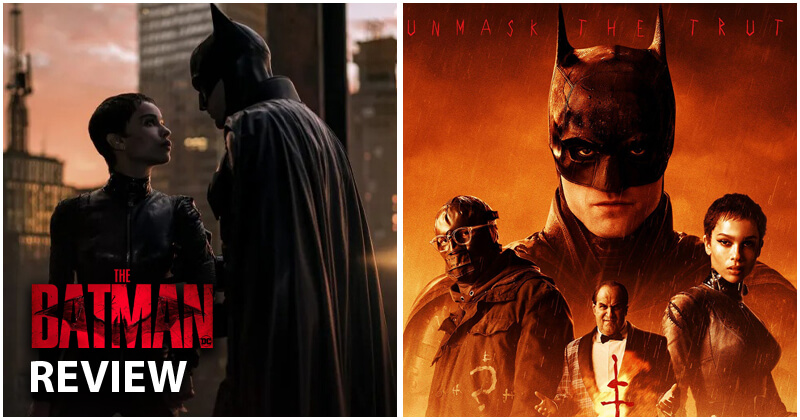 What is that thing that can be measured but cannot be seen? The new The Batman, which will be released in cinemas on March 4, is a splendid masterpiece lasting 2 hours and 56 minutes that’s able to show the Dark Knight in a whole new way, particularly noir. Returning to the riddle, the film is truly capable of making time fly. This happens thanks to a hefty dose of action, coupled with an almost scary Gotham painting, carefully crafted by director Matt Reeves.

The new Batman played by Robert Pattinson is portrayed in an extremely grim way, with something enigmatic that makes him much more like his enemy than he looks. And Zoë Kravitz as Catwoman and Paul Dano as Riddler do a brilliant, magnificently successful job too. Let’s talk about the new film from Warner Bros. and DC Entertainment in a short review, without spoilers, with the aim of bringing out the most interesting aspects.

A frightening cast which can really frighten you

Robert Pattinson plays the role of Bruce Wayne with an almost maniacal naturalness. He’s so maniacal that the dark, dirty, rough atmosphere of the environment around him emerges at every moment. Gotham city is darker and more alive than ever. Crime is increasingly present, corruption is on the agenda and the climate catastrophe is represented in the smallest details. Bruce Wayne is a recluse character, a prisoner of himself, with the heavy feeling of not doing the right thing, with the right effectiveness.

But it’s not just Robert Pattinson, it’s also Zoë Kravitz, who plays Catwoman in the best way: stubborn, physical and decisive. On several occasions, Batman and Catwoman will find themselves having to work together to solve mysteries in which the two characters themselves play a relevant part. Paul Dano, in the role of the Riddler, is really scary. Batman’s perfect antagonist aims to illuminate the city of Gotham in a certain sense, bringing out of the darkness all the secrets buried by politicians and the privileged, lulled by the power of money.

In some way, the Riddler is actually very similar to the Dark Knight, but the way he does things is totally different. Batman’s rival, without too much hesitation, kills any character he considers corrupt, rotten, immoral. After each crime he then leaves a note that says “to Batman”, in which he points out the next puzzle to solve in order to get to the truth.

The Penguin, played by Colin Farrell, is also a character who conveys awe, panic, and some intensely appropriate sadness.

The more there is, the less you see

As we have already been able to understand, Gotham is a city truly dominated by darkness: metaphorically and concretely. The mafia commands some of the most powerful men in the city, and the situation is more disastrous than it might appear to unsuspecting citizens, who are accustomed to looking only where there is plenty of light. The colors most present in the scene are almost always black and red, indicating the link between darkness and crime, blood, as well as the harsh reality of Gotham.

The melancholy soundtrack, composed by Michael Giacchino, is one of those things that makes you really understand that you are witnessing a masterpiece. Warner’s will to take a different path than Marvel’s is evident with a preference for themes and motifs that are more real, strong, authentic. In some ways, they are less delightful, but closer to the sad everyday life recognized by many.

The Batman tells the story of a dark city, through characters that are almost too familiar on the screen, and it does it well. The cast, the direction, the special effects, the soundtrack and the scenography have formed a film that runs extremely smoothly, despite the duration of almost 3 hours.

There’s no doubt that the new movie of the Dark Knight will manage to be remembered for visually captivating scenes and a story told, in its entirety, with extreme incisiveness. Bravo.