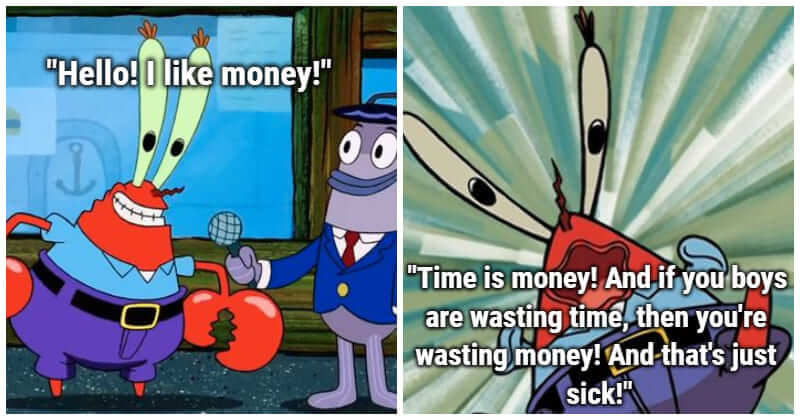 SpongeBob SquarePants has been around for more than 20 years and is still going strong. There are several reasons to enjoy SpongeBob: funny characters and numerous moments that are imparted with valuable life lessons. And Mr. Krabs is one of the most impressive characters.

If you’re looking for some of Eugene Krabs’ most humorous lines, this post is for you. Let’s check them out! In “Wet Painters,” SpongeBob and Patrick have fun at the Krusty Krab which irritates Mr. Krabs. He chastises them, “It is true that time is money. And if you’re squandering time, you’re wasting money as well! And that’s sickening!” It’s difficult not to giggle at such an exaggerated phrase, especially when combined with Krabs’ nasty gaze. In “My Pretty Seahorse”, SpongeBob has a seahorse named Mystery which causes a fuss, Mr. Krabs calls it a monster. “You’re a mystery, SpongeBob.” this is how Mr. Krabs play on words and it’s impossible to be mad at him. #4 “I used to have a kidney stone. Everything passes eventually.” “Driven To Tears” is an example of how hilarious Mr. Krabs is. When SpongeBob says “I used to have a dream.” Mr. Krabs responds in the most callous and insensitive way possible, saying, “Yeah? I used to have a kidney stone. Everything passes eventually.” It’s so direct and unexpected that it’s difficult not to chuckle. In “The Nasty Patty”, SpongeBob and Mr. Krabs believe they’ve killed a health inspector. As a result, the two are attempting to conceal the body in the freezer. A police officer goes to the freezer for ice for her drink, Mr. Krabs is unable to maintain his composure and attempts to block the freezer, “There is no ice! There has never been any ice! Ice is just a myth!” Krabs’ line is certain to make everyone laugh.

#6 “What is today but yesterday’s tomorrow.” “What is today but yesterday’s tomorrow.” A boss’s ideal retort to a slacker employee. It’s only one of several phrases from “Imitation Krabs” that contribute to the episode’s popularity. In “Squeaky Boots,” Mr. Krabs comes to a head when he begins to hear squeaks in the Krusty Krab. Krabs’ remorse causes him to yells at the top of his lungs “Stop it! STOP IT!” He confesses to stealing the boots. This is more like a noise than a quotation, but it’s still one of Krabs’ greatest in “Krusty Love”. On a date with Mrs. Puff, Mr. Krabs’s too nervous to say a word. So that he makes sounds for SpongeBob to translate. And all the comedy comes from the silliest of voices of Mr. Krabs. One of the funniest reactions in “Squid’s Day Off” is when Mr. Krabs gets his palm caught inside a sink drainpipe to get a dime out. When Krabs is sent flying backward, he shouts “Me arms!”. Not only is his expression amusing, but so is the way he yells it Mr. Krabs opens the new Krusty Krab 2 in “The SpongeBob SquarePants Movie.” Perch Perkins congratulates Krabs on the occasion, and on the news, Mr. Krabs just introduce himself “Hello! I like money!” with a wide grin on his face. This state adds to the humor and brilliantly encapsulates Mr. Krabs’ nature.

Man Gets A Tattoo He Found On His Rescue Dog, Instantly “Regrets” It