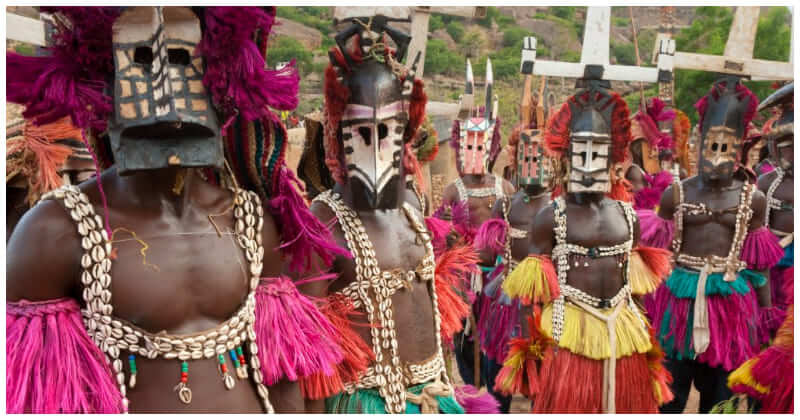 In 1930, scientists discovered the Dogon tribe on the desert of Mali, West Africa. They completely isolate themselves from human civilization, yet they have a culture with beliefs and scientific rituals related to aliens in the star Sirius. At that time, knowledge about the planet Sirius was still not popular and the information the Dogon people transmitted about this star was accurate and consistent with the results of today’s astronomical research. Therefore, Dogon is known as the descendant of aliens.

The tribe exists on their own, while also self-isolating.

Dogon people, which have a population of more than 400,000, are believed to originated from the western Niger River, Burkina Faso, West Africa, between the 10th and 13th centuries AD. When the Muslims arrived and invaded the territory, the Dogon moved to settle in southeastern Mali to this day.

They build houses and cultivate on the sandstone peaks with a culture and beliefs that have a history of thousands of years. The population is scattered among small villages, each of which has a shaman named Hogon. The shaman is the most powerful and respected person in the village, who lives separately from the community without bathing or personal hygiene for a long time. A virgin in puberty is offered as a servant, serving the shaman with food and doing the cleaning. She’s not allowed to touch the shaman and has to come back home every night. The Dogon people are monogamous. The tribe’s young women are subjected to the ongoing depraved customs of female genital mutilation (FGM), and upon reaching adulthood, their marriage would be arranged by their parents. A married woman is only admitted as part of her husband’s family after she has given birth to a child

The economy of the Dogon people is based on farming and raising cattle, with little connection to other ethnic groups as they live separately and only interact within their tribes. In modern times, the Dogon has started to trade with outsiders, becoming somewhat more sociable. Mystic civilization with connection to the alien race Nommo

The Dogon people keep a legend about the tribe’s race: Since ancient times, only the sky god Amma existed. Being lonely, Amma created the female Earth and married her. The two gave birth to Ogo and Nommo, an amphibious, hermaphroditic, fish-like creature. After that, Ogo made the mistake of raping his own mother, Earth, so Amma punished him and turned him into a jackal. This incident caused the Earth to bleed, and the bloodlines turned into ecosystems including animals, plants and humans. The god Amma was very angry because of the incident between his wife and son, so he threw earth balls into space, which then turned into stars, the Sun and the Moon.

Nommo lives on the planet Sirius and is tasked by the god Amma to build a civilization for mankind. Nommo creatures are considered to make up the Dogon people and help this tribe survive on Earth. The book Conversations with Ogotemmeli, published in 1947 by Marcel Griaule also writes that: Amphibian aliens from the star Sirius have landed on Earth in a three-legged spacecraft. They combined their own DNAs with those of other animals of the same sex to create humans.

Another strange thing is that in Dogon mythology, there is an extremely accurate description of the brightest star in the sky, Sirius. The legend speaks of the star Po Tolo, which revolves around Sirius in a period of 50 years, is a planet with a metal ground, making itself dense and have a massive weight. In the middle appears the star Emme Ya with a larger size but a lighter mass than Po Tolo, that was red like blood when it first formed, but then gradually turned white. In the 19th century, astronomers discovered that a white dwarf star, the smallest and most dense in the Sirius planetary system, revolves around Sirius. It is precisely the image of the star Po Tolo and also contains the presence of a third star, conjectured to be Emme Ya.

The Dogon people knew about the existence of planets around the Sirius star system thousands of years ago without any scientific and technological equipment such as telescopes. Their astronomical knowledge continues to be a headache until today, in which scientists still haven’t managed to find out and explain. The origin of the Dogon people remains a mystery up to now, with many theories suggest that they are descendants of the alien Nommo. This is still a puzzle urging experts to search for a solution for nearly a century.