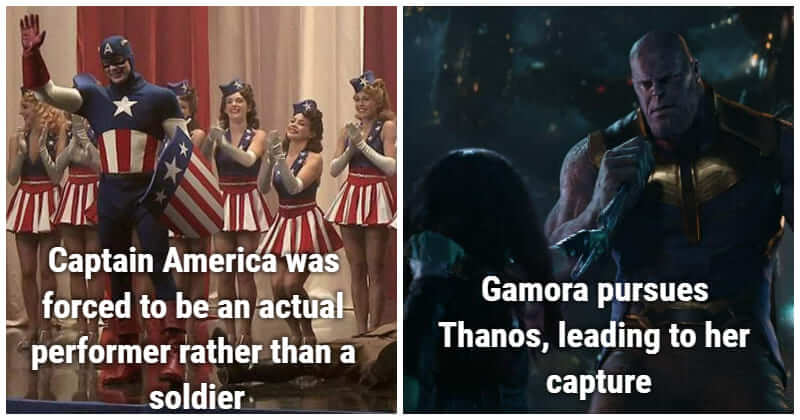 Sometimes you think back on your mistakes and hate yourself for making those, even you are obsessed with them for a really long time later. However, making mistakes is inevitable in life. No err is human. Mistakes eventually give you lessons that are much more valuable than any stories you heard about.

In addition, no matter how brilliant and excellent a person is and what social position they stand in, they still make unwise decisions. For example, one teacher of our great genius, Thomas Edison, once refused him because he thought Edison was a stupid student.

Such stories appear not only in real life but also in movies, particularly in MCU movies. The main characters sometimes make silly decisions that push the plot to the climax or give it a twist. Despite being abnormal, MCU superheroes still give wrong choices sometimes. You don’t believe it? Scroll down and check whether I am right!

#1 With a brave spirit and a superpower, Steve Roger wasn’t still properly recognized by the government If you are actually a big fan of Captain America, you probably can’t forget one of the dumbest moments in his life – it’s when he was forced to be an actual performer rather than a soldier. After successfully transforming into a super-soldier with the assistance of Dr. Erskine’s serum, Steve had a great performance to show off his unbelievable power by chasing the German spy attacking the lab.

But ridiculously Rogers’s superiors task him with being a performer, not a soldier. They enlist him in the United Service Organizations, send him traveling across the country, and take advantage of his newfound celebrity to promote war bonds and perform musical numbers. One of the most stupid activities of Dr. Strange that destroy his career is losing his magic hands of a doctor in an accident. Though that accident definitely changes his normal life into a superhero, his reckless driving is still stupid. Before becoming a Master of the Mystic Arts, Doctor Strange used to be egotistical to think himself invincible. That’s why he drove carelessly on the streets, speeding, passing cars and causing an accident. With the pangs of losing family, Drax seems to make an unwise decision. He just rushes to revenge the one that caused his loss but forgets to make a clear plan. Getting sick of waiting for Ronan to come, Drax calls the villain and tells him where he and his team are.

If there is a detailed plan to take down Ronan, his actions might work well. But if not, it’s obviously dangerous, considering Ronan’s substantial power. Moreover, his action also puts the entire team in danger.

#4 Gamora comes to Thanos, leading to being captured Because of being the only one who knows where the Soul Stone is, Gamora has to try her best to protect it from Thanos. Knowing that she should have escaped from Thanos as far as possible. However, in reality, she thinks she can stop him from his intention of wiping out half the universe’s population. She chooses to confront him and that is a stupid decision. Steve Rogers was assumed to die after the craft crash. But it seems no one really made their all effort to find him somehow. Howard Stark finds the Tesseract in the Arctic waters, which would lead him to the idea of the area in which Rogers crashed his aircraft. However, his comrades had launched a recovery effort right away, Rogers and the aircraft wouldn’t have been hidden under the ice for 70 years.

#6 Loki disguises as Ordin to trick all Asgardians but doesn’t act like Ordin. More ridiculously, no one realizes until Thor returns Thor: Ragnarok begins with plenty of silly things. Loki secretly returns Asgard and rules as Odin after sending his father away. However, Loki acts nothing like his dad, such as replacing important people in the court with blundering fools, erecting a gigantic statue of Loki, putting on plays praising Loki’s sacrifice, and generally lazing about using a personality much different than that of his father.

However, no one in Asgard realizes that his real king is exchanged even though there are many differences easily revealed from the fake ones. It seems not really hard to list silly decisions of Trickster God of Asgard, Loki. One of the dumbest choices of Loki is when he tries to escape from his sibling, Hela. While battling Hela, Loki seems to realize that he and his brother aren’t his sister’s opponent. In a moment of fear, he wants to return to Asgard where he believes he’ll be safe. However, this allows Hela to follow her brothers into the Bifrost, push them out of the portal, and make her way to Asgard. This decision is so dumb that it not only leads to him and his brother being trapped in an unknown realm but also makes the Asgardians miserable under Hela’s rules.

Facing our enemy who causes our beloved people’s death, no one can be calm. It’s understandable. However, in the effort of giving them back, we should try our best.

In Avengers: Infinity War, to change the ending that Thanos obtain his satisfactory result to kill half population, every MCU hero bands together to stop him, leading to a confrontation on Titan where the heroes distract Thanos, allowing Mantis to subdue him while Peter Parker and Tony Stark try to pry the gauntlet holding the Infinity Stones from Thanos’s arm.

However, the only thing Peter Quill can think of is Gamora’s death caused by Thanos. He loses all sense of reason and punches Thanos multiple times, which makes Mantis’s fragile connection to Thanos is broken, allowing him to regain his strength, fight off the heroes, gain another Infinity Stone, and disappear.

#9 The Ravagers Allow Groot to freely wander the ship We may meet one of the silliest characters in MCU: Taserface. His biggest mistake is underestimating Groot. He allows Groot to freely wander around the ship. Taserface should have known that Groot would help his friends. Although his body size is small, he’s still a member of the Guardians’ team. Baby Groot retrieves a prototype fin for Yondu, allowing him to escape from his cell and slay every Ravager who turned against him. In the very first MCU movie, Tony Stark is captured by Ten Rings, a terrorist organization. They want him to remake a version of Jericho for them, his new and improved advanced weapons system, a highly destructive device. They know Tony is a genius-level smart, but still, give him all things he needs. Moreover, the language barrier between the group and Stark means that they can hardly communicate with him and certainly can’t track his progress on the device. Eventually, the result is that he creates a tiny arc reactor and the first rough version of his Iron Man suit and ruins the Ten Rings’ plan. This is their dumbest decision. Loki calls the Chitauri for help to take over the Earth in The Avengers. While the strongest superheroes are trying to make a plan to take him down without an immense loss of human life, the World Security Council almost immediately decides to launch an atomic device at Manhattan, ending millions of people in order to stop the Chitauri invasion.

This should be the very last response, but it’s the first thing the council decides to employ. It seems they don’t take much attention to the civilians’ lives. With that leadership, it’s no wonder their civilians are constantly at risk. Being an intelligent superhero in MCU, Tony sometimes disappoints us with his arrogance. Tony proves that he truly cares for Pepper Potts, but he directly puts in her danger in Iron Man 3.

He gives his home address on TV, basically inviting the Mandarin to attack him, so he knows clearly that there would be a battle soon, but he doesn’t bother to send his lover away, even while Pepper attempts to get him leave, he insists that he can’t protect her.

#13 Volstagg And Sif give the Aether to the Collector

The Aether, also known as the Reality Stone is on Asgard at the end of Thor: The Dard World. It’s not safe because it’s so close to the Tesseract. Therefore, Volstagg And Sif decide to give it to the Collector, a keeper of a large collection of interstellar relics, objects, and specimens.

However, he exactly isn’t a shining example of morality. He takes what he wants and doesn’t care much about how to get it. He acquired many of the items in his collection through unlawful means. How can they trust and give him one of the most powerful things?

#14 Pietro and Wander team up with Ultron Wanda and Pietro’s choice to work with Ultron is a dumb plan. Ultron is a huge robot whom the twins have no idea about. He just convinces them with some nice words about not liking the Avengers and they immediately decide to battle the most powerful superheroes in existence and bring them down. Wanda can’t even look inside Ultron’s head to see his true intentions. They are driven by their anger and desperate for revenge, but banding together with a devious villain Gamora always proves that she is better than her sibling, Nebula. However, considering the loyalty to their father Thanos, Nebula is clearly better. She can do whatever to take her father’s favorite. If Ronan can see that and take advantage of it, he should send Nebula to retrieve the orb and he might have a chance to achieve his desire.

#16 After stealing the Ant-man suit, Scott wears it and randomly presses buttons on it without knowing what they do After stealing a well-protected suit, Scott Lang seems very disappointed but curious. He immediately puts it on even randomly presses buttons on it. He doesn’t know anything about that suit but there must be something special about it. He steps into it with no concern for his own safety.