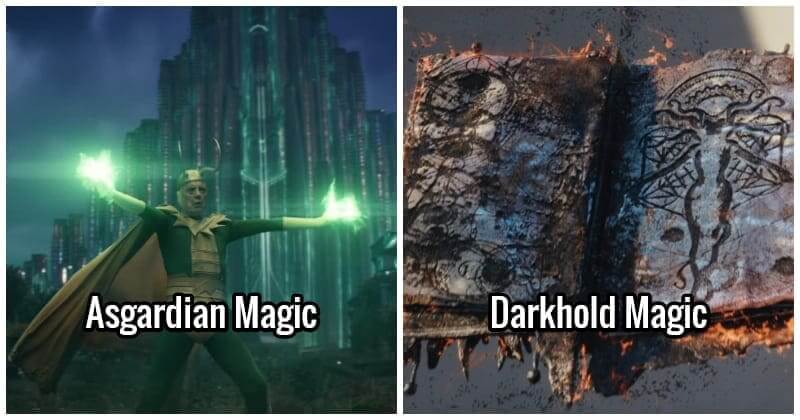 With Guardians of the Galaxy and Captain Marvel, the MCU embraced its more extraterrestrial paradigms in the first three phases. However, with WandaVision and Loki, the brand has recently firmly etched its runes on all things arcane. Doctor Strange in the Multiverse of Madness is expected to go even deeper into the MCU’s magical mythology and cosmic arcane. Sorcerers and technomancers in the Marvel Cinematic Universe acquire their power from many sources in order to harness nearly endless magical powers.

The following is a guide on how the many realms of magic have behaved and interacted within the boundaries of the known MCU canon thus far, and how their distinctions shape the multiverse characters that viewers have grown to recognize. Here are five different sorts of magic. If science progresses far enough, it can become indistinguishable from magic to the inexperienced eye. Asgardians do not regard magic as a magical art form, but rather as a way of life. The Asgardians consider science and magic as two sides of the same coin, much as mankind considers science as the foundation of everything. Asgardian Magic enables them to build massive structures, open gateways to other realms, and control strong magical artifacts. Surtur destroyed all Asgardian magical artifacts during Ragnarok because the Asgardian realm was home to some strong Asgardian magical artifacts. One of Asgardian Magic’s weaknesses is that, despite millennia of study, it still lacks power when compared to the feats of other types of magic on this list. As the name implies, the energy for this destructive magic comes from the dark dimension, the domain of Dormammu. Using dark Dimension magic has various advantages. It is more powerful and grants abilities that conventional Eldritch magic cannot, such as near-immortality and indestructible. However, this type of magic is a double-edged sword. If you do not fully comprehend the magic, you may wind up as one of the ‘Mindless Ones,’ captives of Dormammu cursed to suffer for all eternity. Eldritch Magic is seen being employed by masters of the mortal realm’s mystic arts. The Ancient One, Doctor Strange, Wong, and Baron Mordo have all mastered this technique at some point in their lives. Eldritch Magic has the ability to open portals, generate various types of weaponry, summon the might of ancient beings, and harness the magical properties of mystical artifacts. Unlike Asgardian mysticism, Eldritch magic-users have access to a much larger number of spells, some of which are powerful enough to wipe the whole world’s memory or send the entire cosmos into an infinite time loop. The Darkhold is an arcane book of magical runes of unimaginable power. But every spell you learn from the Book of Sins has a cost. Its origins can be traced back to an ancient evil creature as old as the cosmos itself. Because the book requires dark matter in every spell it casts, it is speculated that dark matter serves as its fuel supply. The Darkhold, which is widely sought after by both mages and non-mages, provides answers for every man or woman who comes looking for them. And, as previously said, each answer it provides is extremely strong, but it comes at a cost. Many benefactors have developed marvelous things using the Darkhold, such as a whole Matrix-like architecture called the Framework. Agatha Harkness utilized its power to liberate herself from Wanda’s grip on the Hex. It also considerably boosted her abilities. Chaos Magic is a rare and incredibly effective style of magic that is extremely unstable and needs an incredible amount of discipline to master. Wanda was only able to access this power because she was connected to the Mind Stone. The Scarlet Witch of folklore has the capacity to ruin the world through Chaos Magic. If the prophecies are correct, Wanda has unrivaled power. The Hex Anomaly at Westview was only the beginning. Wanda’s Chaos magic allows her to remake reality as she pleases. No one on this planet can stop her if she gets to understand the true depth of her chaotic magic. Doctor Strange is included in this.