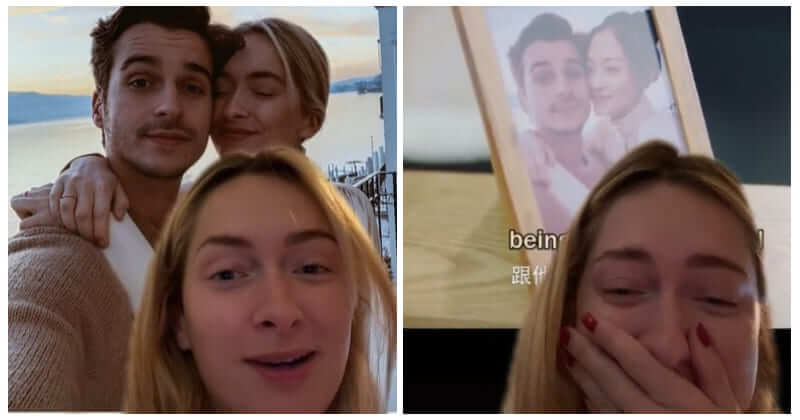 Rianne Meijer is a social media influencer from Dutch with over 103k followers on TikTok and more than 1.5M followers on Instagram. On these platforms, she often shares photos with her boyfriend, Roy Atiya. But one day she was left speechless when incidentally noticing a picture of her and her boyfriend was used in a Chinese drama. What’s even more surprising is that her face in this picture was changed with the face of the show’s lead actress.

As soon as she shared her hilarious discovery on TikTok, her video blew up. And now it has nearly 1M viewers and over 25k shares. Are you curious? Scroll down to read the whole story. Also, hope you enjoy it. In a 22-second TikTok posted on October 13, Meijer compared the original picture with a screenshot from the show, “Summer Again.” The original photo Meijer and Atiya took in front of a brilliant skyline and glistening stretch of water in celebration of love ceremony was uploaded on Meijer’s Instagram. The post’s location says it was taken at the Park Hotel Vitznau in Vitznau, Switzerland. The clip then shows a scene from the Chinese drama “Summer Again” which features Meijer’s photo. The film crew even edited her face out of her own picture and replaced her with Li Borong – the drama’s lead actress. According to local Chinese media, Li’s character in the show is in a relationship with a man named Andre. The program utilized Meijer’s Instagram photo to depict Li’s character’s boyfriend without her permission. Meijer tried to make light of the situation by jokingly saying, “I mean, they look good together. I don’t know, it’s fine!” While some of Meijer’s fans thought the situation was amusing, others believed that she should “charge the show for the use of her picture.” Meanwhile, some Chinese Weibo users have described the scenario as “embarrassing.” In an update, Rianne revealed she received an apology from the show after she flagged the picture to them. She wrote that “the crew of the show send an apology this morning and honestly; ALL GOOD. They are so sweet and this gave us a good laugh.”

Not only Rianne but also her fans found the story amusing. That’s the reason why her video went viral and received nearly 1M likes. Her followers reacted quickly and called it the ‘funniest thing ever.’

22 Of The Weirdest And Funniest European Things, As Shared In This Group

A Good Compilation Of Short Stories About People’s Weirdest Lifestyle

15 Signs That Are So Full Of Impeccable Irony

18 Unexpected Pictures From The Lives Of Delivery Drivers

Epic Design Fails That Are Disasters Waiting To Happen

“I Straight-Up Tell Our Clients Not To Do It”: People Are Roasting These Worst Interior Design Trends That Everyone Should Avoid

15 Funny And Weird Moments Spotted During A Flight

If You Think Museums Are Boring, These Funny Pics Will Change Your Mind