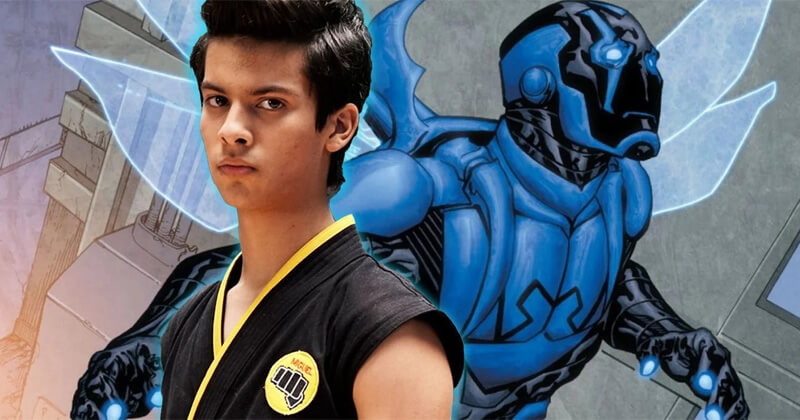 As DC fans already know, the pre-production of Blue Beetle has started somewhere with the young Xolo Maridueña who will soon join the DC Extended Universe in the role of Jaime Reyes, the latest incarnation of this famous superhero.

Just a few hours ago, the actor released the first details on the costume that would be worn by his character in an interview with USA Today. Maridueña then particularly focused on his muscle mass – which has yet to fully fit the Blue Beetle suit, as well as his new cinematic experience.

“We’ve done two suit fittings. They’re hoping that I get more buff by the time we actually start filming. But I’ve seen the suit, and it looks awesome,” he said. “Honestly, it feels like I’ve skipped a few stepping stones. “Cobra Kai” has been such a wonderful opportunity, (and) it feels a little bit intimidating being this is my first movie and it’s in a realm that’s totally different than anything I’ve ever worked on,” the actor continued. “I’m nervous, but I’m excited. It’s gonna be important, not only for Latinos and to see people of color, brown people, represented onscreen, but also show a story that we haven’t really seen before.”

Blue Beetle will focus on the adventures of Jaime Reyes, a Latin American boy destined to take on the identity of the well-known DC superhero and become his third incarnation. Created by Keith Giffen, John Rogers, and Cully Hamner, this character made his debut as Jaime Reyes in the 2006 comic book Infinite Crisis #3 and as Blue Beetle in Infinite Crisis #5. Unlike his predecessors, Jaime Reyes received his powers via an alien scarab. Previously, this suit was worn by Dan Garrett – the original Blue Beetle who appeared in the Golden Age of comics, and by Ted Kord in the Silver Age.

With a screenplay written by Gareth Dunnet-Alcocer, the film will be directed by Angel Manuel Soto, who is known for the acclaimed Charm City Kings (2020). In recent months, Soto has expressed all his enthusiasm in being chosen to direct the first superhero movie starring a Latin American protagonist.

“It is an honor to direct ‘Blue Beetle,’ the first Latino superhero film for DC,” the director shared with The Wrap. “I want to sincerely thank everyone at Warner Bros. and DC for trusting me to bring Jaime Reyes to life. I can’t wait to make history together.”

Blue Beetle is expected to simultaneously appear on the big screen and on HBO Max on August 18, 2023. Production of the film is currently underway, and no further details have been disclosed at the moment.