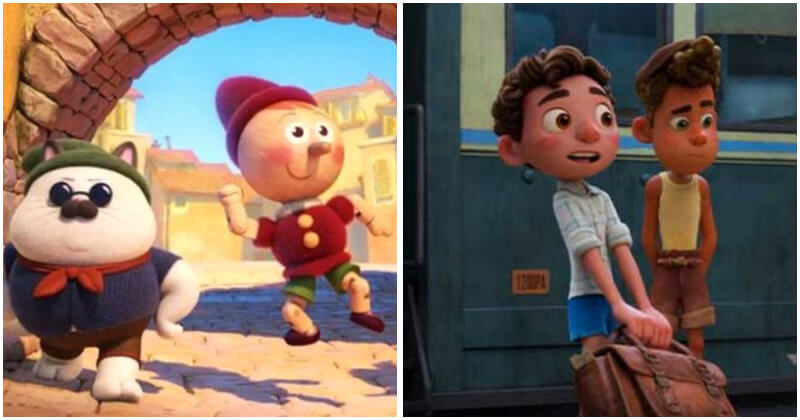 It’s no longer something fresh for moviegoers to see filmmakers hide Easter eggs in their movies. The purpose of these details is to make the film more exciting, attract and arouse the curiosity of audiences. And of course, for Pixar’s creative directors, these references are indispensable.

Have you watched Pixar’s latest animation “Luca”? It’s a super cute story revolving around the main character Luca and his adventurous summer, and some dedicated Pixar fans have expressed their excitement discovering that many interesting Easter eggs were smartly inserted in this movie.

Are you curious about them too? Keep scrolling down to discover 10 surprising gifts from “Luca” that can drive every Pixar fan insane! Some fans have noticed that next to Alberto’s makeshift bed, there is a Carl Fredricksen hat in “Up” and underneath it, you can see the boot that holds the plant in “WALL-E”. Giulia once noted that this telescope belongs to “Old Man Bernardi”. Maybe you didn’t know it yet, but Bernadi has been with Pixar since 2003 and he is also the visual effects supervisor for “Luca”. Disney adapted this movie from a novel and released it in 1954. That the movie’s poster appears in the theater fits right in Luca’s 1950s setting, don’t you think?

#4 Pinocchio makes a cameo in “Luca” In Giulia’s room, there is a book Pinocchio and Luca even dreams about the characters in Pinocchio – another famous Disney animated movie.

#5 Giulia is probably a big fan of Donald Duck Many fans have spotted that in Giulia’s room, there is a stuffed animal that looks like Donald Duck – one of the most iconic Disney characters.

#6 The Pixar ball (aka the Luxo ball) During the bike race scene, you can clearly see a yellow and blue ball with a red star on it on a rooftop. This ball has become a familiar item to Pixar fans as it frequently appears in this studio’s movies, and “Luca” is not an exception.

The Pizza Planet truck made it first debuted in Pixar’s classic movie “Toy Story” and went on to appear in many subsequent Pixar projects. This truck once again appeared in the form of a rocket ship on the streets of Portorosso in “Luca”. The alphanumeric sequence “1200PA” is engraved on a metal plate on the side of the train car. This character could be an acronym for 1200 Park Avenue, which is the location of Pixar in California. In the United States, 96480 is a postal code for Emeryville, California, where Pixar’s headquarters are located.

#10 The alphanumeric sequence A113 written on the train ticket

On the train ticket that Alberto gives Luca so that he can leave to attend school, you can clearly see the alphanumeric sequence A113. This is a classroom that is frequently used by character animation students at the California Institute of the Arts and there are also many Pixar and Disney workers graduating from this institute.