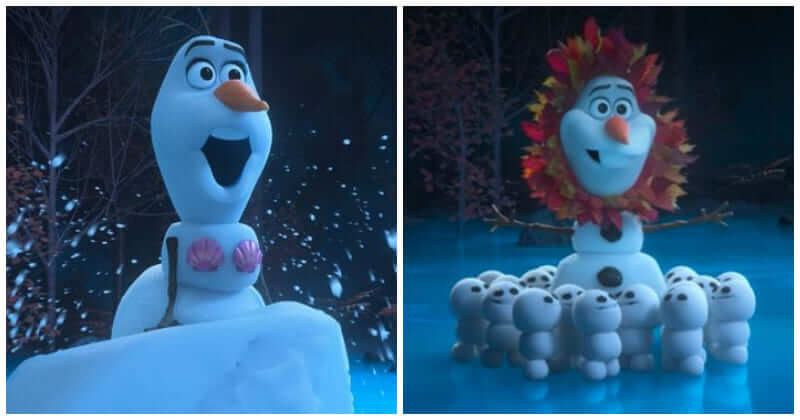 Nobody can doubt the Frozen franchise’s success when both films are consistently included in Disney’s top-grossing films. In addition to the film’s success, the characters in the film are similarly fascinated, especially when the key characters, such as Elsa and Anna, are constantly a hot topic of conversation. However, the film’s supporting character line, particularly the charming Olaf snowman character, earned a lot of positive feedback from the audience. Olaf Presents, a Disney+ original short series in which he, Marshmallow, Sven, and the Snowgies provide fast-paced hilarious reviews of popular Disney movies, was recently published and received tons of positive reactions.

Olaf’s comedic abilities are put to good use throughout the series, as he pokes fun at and criticizes some of Disney’s most renowned stories. Olaf hilariously brings some great Disney stories to life in a manner that only he can, whether it’s underlining the grief of Mufasa’s death in his version of The Lion King or singing “Part of Your World” as Ariel in a retelling of The Little Mermaid. How many films do you recognize in this short film? Don’t forget to let us know in the comments! In the opening episode of Olaf Presents, he tackles The Little Mermaid. Sven portrays Prince Eric, and he plays the majority of the parts. He also performs a few bars of “Part of Your World,” one of the best songs from The Little Mermaid. Olaf portrays King Triton to a tee, highlighting his imposing size and referring to Ariel as a “trash collector.” He had some amusing phrases in his recapping of the movie, like calling the poor unfortunate folks “emaciated shrimp.” The third episode of Olaf Presents sees Olaf recreating The Lion King, beginning with his own interpretation of “The Circle of Life.” Olaf does not hold back in recreating Mufasa’s horrible death scene with the Snowgies as a stampede of wildebeest. He then goes on to explain how upsetting the death scenario is by pointing out that Mufasa initially survived the stampede before being assaulted and betrayed by his own brother. Olaf tells the story of Tangled, a modern fan favorite, in the fifth and final episode of Olaf Presents, which he claims is about a “close personal friend” of his. With Sven playing Maximus and Bruni playing Pascal, other Frozen characters get to play their Tangled counterparts. Olaf’s frequent attempts to imitate Flynn Rider’s distinctive smolder are the episode’s most amusing running gag. With the help of Gale, Olaf also recreates some of the film’s biggest musical numbers, including the classic floating lanterns scene. Olaf presents the famous story of Aladdin in episode 4 of Olaf Presents. He mentions a few of the difficulties that fans have with the plot, including the Sultan’s ability to change the rules to allow Jasmine to marry whom she wants. Sven gets to play Jasmine, and Marshmallow is excellent as the Cave of Wonders. Olaf also attempts to imitate the Genie, noting that making pop-culture allusions appears to be a requirement of being a genie. Olaf tells the narrative of Moana in the second episode of the series, beginning with him playing baby Moana and realizing the water is calling him. Marshmallow, who portrays Te K, and the Snowgies, who is ideally cast as the Kakamora, help Olaf out. He sings out a few notes from the movie’s songs, including a witty introduction to the uplifting ballad “I Am Moana.” He can flawlessly duplicate Maui’s shapeshifting skills as a flexible snowman, taking on the guise of various animals. Frozen II features some significant somber moments for an animated kids’ movie, and Olaf expertly lampoons this intensity by spotlighting the fake-out of Elsa and Olaf’s deaths, as well as Anna’s distraught reaction. Olaf then says he forgot what happened after that and jumps to the joyful ending. The scene is one of the best in the film, and the self-aware joke provides a fantastic and rewarding conclusion. It isn’t part of Olaf Presents, but it demonstrated that Olaf’s retelling of a movie’s events might be more than a one-off prank. Olaf tells the story of the first Frozen movie to a group of folks who were not present at the time. He does more narration than in Olaf Presents, but he also does a lot of acting, taking on several parts and acting out all of the movie’s big moments in a dramatic manner, delivering some of his best lines in the Frozen sequel in the process. Despite the fact that this segment is not part of Olaf Presents, it is the reason the show exists. The setting for Olaf Presents is the same place where Olaf acts out the events of Frozen.

All I Want For Christmas Is You Royalties: How Much Mariah Carey Earned?

10+ Actors Who Came Back To Portray Their Most Iconic Roles

9 Most Intense Fears Of Your Favorite Celebrities

What 15+ Movie Characters Would Look Like Without Their Iconic Makeups