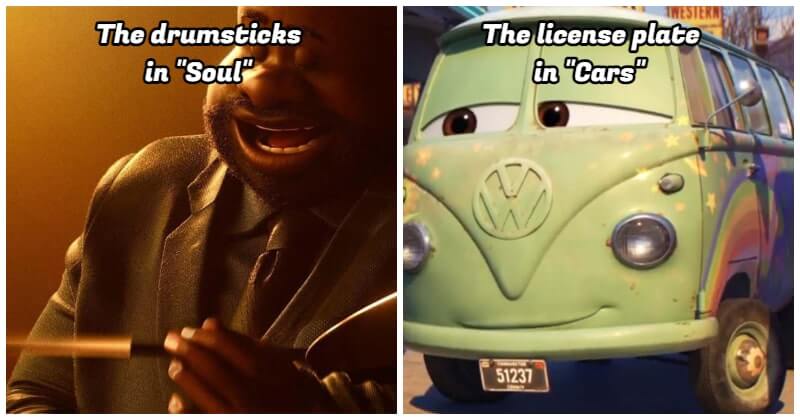 It’s no secret that Disney loves to hide its iconic characters in other films to attract and arouse the curiosity of audiences. However, because these Easter eggs are too familiar, they’re sometimes difficult to surprise the viewers now. Therefore, Disney filmmakers come up with a new idea and reference the previous projects of their actors.

There are several times that Disney crew subtly inserted into their films references to the iconic roles of their actors. For instance, Curley Baker in “Soul” uses the signature Vic Firth drumsticks and they are also the same drumsticks that voice actor Questlove uses in real life, or Mr. Potatohead played by Don Rickles once said Rickles’ classic catchphrase in “Toy Story”…

Want to know more? Go down the pages to discover these clever and fascinating Easter eggs, and don’t forget to let us know your opinion in the comment section below!

#1 “Aladdin” with Will Smith as the Genie

In the live-action version of “Aladdin”, Will Smith played the Genie. As the audience can notice in one scene, Genie made a prince appear dressing in the Fresh Prince color scheme in the distance. This prince reminds us of the previous show of Will Smith, “The Fresh Prince of Bel-Air”.

#2 “Cars” with George Carlin as Filmore the VW hippie van #3 “The Incredibles” with Jason Lee as Buddy

When Buddy was still a loyal superhero fan and hadn’t turned into the villain Syndrome, he had a chance to encounter Mr. Incredible. This superhero called him Brody before remembering that his name was actually Buddy. And did you know that Brody is the name of another Jason Lee role in “Mallrats”?

#4 “Soul” with Questlove as Curley Baker Questlove is a professional jazz drummer and he also plays the role of Curley Baker in “Soul”. Curley uses Questlove’s signature Vic Firth drumsticks in the film, which is definitely one of the most subtle references of Disney movies.

Don Rickles is the voice actor for Mr.Potatohead in “Toy Story” and one of his most classic quotes is “What are you looking at, Hockey Puck?” This quote was cleverly incorporated in the film as a way to remind viewers of Rickles’ comedy career.

#6 “The Emperor’s New Groove” with Eartha Kitt as Yzma Yzma, the role of Eartha Kitt in “The Emperor’s New Groove”, turned into a cat after drinking the wrong potion. This detail is a reference to one of Eartha Kitt’s most famous roles – the Catwoman in the 1960s Batman series. Bravo and Echo wear helmets similar to those of the two prominent characters from Top Gun, Iceman and Goose. Interestingly, these characters are all voiced by Val Kilmer and Anthony Edwards.

#8 “The Incredibles” with Samuel L. Jackson as Frozone Here is another fun Disney Easter egg. In the Incredibles, Frozone gets held at gunpoint by a nervous cop. This scene is similar to a classic scene in another Samuel L. Jackson’s film, “Die Hard with a Vengeance”. Lightning McQueen is sentenced to pave a town’s road. Did this detail remind you of something? This is the same punishment that Paul Newman receives as a rebellious prison inmate in “Cool Hand Luke”. #11 “Moana” with Dwayne Johnson as Maui Maui does a “pec pop”, the Rock’s signature action that he once did in his previous film “Journey 2: The Mysterious Island”.

#12 “Aladdin” with Robin Williams as The Genie In “Aladdin”, The Genie once turned into Mrs. Doubtfire. Both of these characters were played by the late Robin Williams and are hugely loved by the audience.