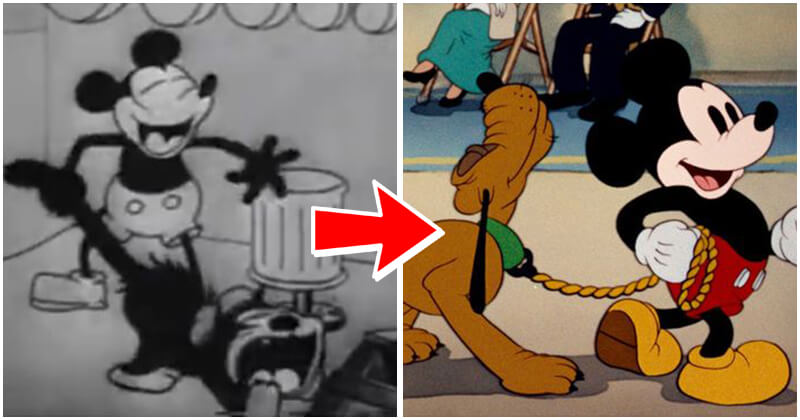 There are so many famous cartoon characters around this world, but if we talk about the most iconic one, the first name that comes to our mind is definitely Mickey Mouse. He made his debut with Steamboat Willie in 1928, and sure enough, the Disney mascot has changed so much since then. But no matter what happens, his popularity has never dimmed down a bit.

So, how exactly has Mickey changed over the past 90 years? Let’s scroll down and find out with us, the answer will absolutely delight you.

#1. His appearance has changed. From a black and white mouse with incredibly huge eyes to an adorable 3D character, Mickey has always been reimagined to catch up with the latest trend in the animation industry. Mickey’s first voice actor was Carl W. Stalling, but Walt Disney quickly took on the role for years afterward and hadn’t stopped until the last years of his life. Other actors who lent their voice to this fun-loving guy are Jimmy MacDonald, Wayne Allwine, Bret Iwan, and Chris Diamantopoulos.

#3. He went from a scamp to a trustworthy leader. Mickey used to be quite mischievous back then, but now all of his friends often lean on him whenever they need a piece of advice or some mental support. He’s kind of the leader of the group.

#4. He learned to appreciate and cherish his love interest.

In the early shorts, Mickey’s behaviors during his date were sometimes impolite. But now, Mickey and Minnie are the relationship goal of many real-life couples.

#5. He treats animals much better now. Before Pluto showed up, Mickey was an impish mouse who tend to mistreat the animals around him. Thankfully, he has evolved into a better version of himself, much kinder and friendlier. And he even has himself the best doggo companion in this world.

#6. His bond with Donald and Goofy is stronger than ever. Both Donald and Goofy played the antagonist in the old days, but now they are Mickey’s best pals and their friendship is definitely something we can’t help but admire. Mickey Mouse and his pet Pluto now reside in a suburb with a two-story house of their own, which is called Mickey’s House of course. Mickey started as a normal guy with some very simple goals, but later he even fought against villains and became a hero himself.