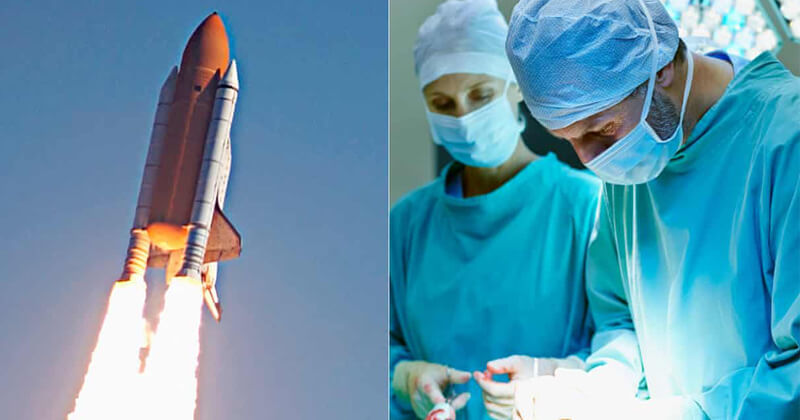 This is probably the most interesting career comparison. In the end, who will be the winner of the intellectual battle? If we were to pick a group of the smartest people in the world, many of us would think we need NASA and Johns Hopkins Hospital. Americans often say, “It’s not rocket science,” and they often say, “It’s not neurosurgery.” NASA is home to some of the best rocket engineers on the planet, and Johns Hopkins Hospital is the world’s leading brain surgery facility.

Both of these particular occupations are characterized by the need to equip the person who pursues it with a huge amount of knowledge, representing the capacity of the mind to work in their head. But have you ever wondered if between a rocket engineer and a neurosurgeon, who is really smarter than the other?

This is probably the most interesting career comparison, because we have Iron Man on one side and Dr Strange on the other. In the end, who will win the battle of wits?

Engineers and doctors: Who deserves the crown in the hearts of the public?

Regarding the origin of idioms in the US, the saying “It’s not rocket science” is said to have originated in the 1950s, when the Americans began to recruit German scientists to them to develop military missile programs and rockets to conquer space.

Rocket science at that time was called the pinnacle and most difficult science to conquer, when the Americans could not do it themselves.

The statement “It’s not neurosurgery” has a less clear history. But it seems to have come before, around the 1920s, when Dr. Harvey Cushing began to develop pioneering techniques in the field.

Cushing was the one who made brain surgery a specialty and set it apart from other surgical procedures. Possibly because of the complexity of manipulating the brain, the profession garnered public admiration and admiration, leading to the birth of the original idiom.

Now, in the latest issue of the medical journal BMJ, a team of UK-based neuroscientists have tried to balance their careers with rocket engineers as objectively as possible.

They analyzed the cognitive test scores of 329 aerospace engineers and 72 neurosurgeons, comparing their problem-solving skills, including planning and reasoning abilities, memory, attention, and emotional processing. The goal is to find out which new profession is worthy of the crown that the public confers on them.

The results showed that neurosurgeons significantly outperformed aerospace engineers on the language-related problem-solving scale. Specifically, they achieved higher scores on the test of identifying rare words and understanding verbal analogies.

Study lead author and neuroscientist Inga Usher from University College London says the linguistic advantage in their profession may come from doctors’ exposure to medical terminology derived from Greek and Latin.

“On the other hand, aerospace engineers showed significantly higher scores on tests of mind manipulation and attention,” Usher wrote. These tests involved manipulating 3D objects, something a rocket engineer had to master during their training.

In addition, “no differences were found between the two groups based on dot scores for memory, spatial problem solving, problem solving speed, and speed recalling a memory”, research results said. At this point, we can temporarily conclude that rocket engineer and neurosurgeon both have their own strengths. But it seems that all of their strengths come from constant practice and execution.

So Usher and his colleagues did one more comparison. They took the test scores of 18,257 ordinary people representing all the remaining occupational groups in society and compared them with neurosurgeons and rocket engineers.

As for the neurosurgeons, he found they had a faster problem-solving speed, but a slower rate of recall of memories. Here are the two most notable differences in test scores between them: So, what do all these surveys mean? “In situations where we don’t have to deal with the situation quickly, it makes sense to use the expression ‘It’s not neurosurgery’,” said Usher’s team. If we need to recall information, it’s best to avoid using this idiom”.

As for rocket engineers, it seems that they are nothing more special than ordinary people. So anyone can become a rocket engineer with practice, at least according to this study.

Of course, to be successful in any field, especially academia, you also have to accumulate a huge amount of knowledge to be able to do the work you pursue. But the researchers say it appears the neurosurgeon and rocket engineer are both “unnecessarily being put on a pedestal”.

This can prevent many young people from having dreams of pursuing these two academic fields. In addition, “there may also be other professions that are more worthy of standing on that pedestal”, the scientists write. “The work we should do in the future is to determine which industry groups are most worthy of the title”.

Collection Of Hilarious Moments Showing Sagittarius Is A Sweet Addiction

Parents Decides That His Ventilator Shut Off, But A Miracle Of Love Comes To Save His Life

Get To Know Taurus Through Their Quotes

Cute Little Boy Makes A New Friend On The Beach

Capricorn – Descendants Of The Rich People, Proving In These Memes

20 Funny Memes That Divulge The Inner Child In Each Taurean