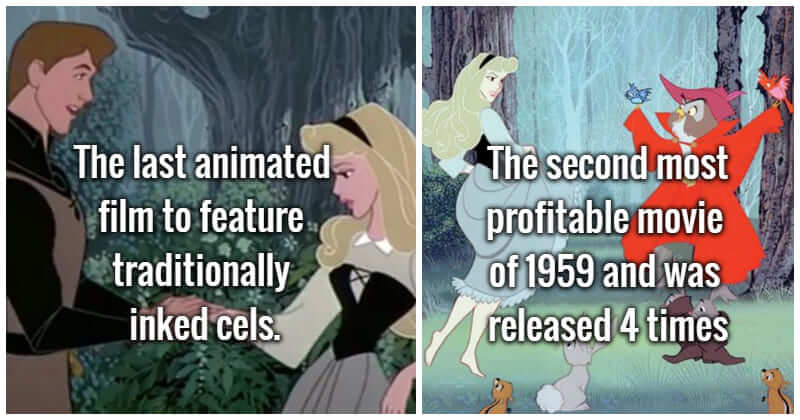 Did you know that “Sleeping Beauty” is one of the most lavish animated films ever made in 1959? It has been a long time now, the lovely story steals all the audiences’ hearts for decades, and even more. It tells a gorgeous princess cursed by a wicked fairy to slip into sleep and is only waked up by true love’s kiss.

“Sleeping Beauty” has been among the most tremendous, incredible, and timeless classic animations for various reasons. The romantic story, interesting plot, and outstanding music make it rewatchable over and over again.

But wait for minutes. Can you confidently claim you know everything about this captivating movie as you’ve watched it many times? If yes, great! Below are the most fascinating facts about “Sleeping Beauty” that you might have overlooked. Let’s check them out!

#1 The Disney animated film with the longest production schedule. The story was first written in 1951, the voices were recorded in 1952, the animation was completed between 1953 and 1958, and the stereophonic soundtrack was recorded in 1957.

#2 The last Disney feature to have cels inked by hand. From “101 Dalmatians” onward, the cleaned-up pencil drawings were xeroxed onto the cels. And Disney used the xerography method in several parts of “Sleeping Beauty”

#3 The castle of Sleeping Beauty was employed as an advertising tool. The Imagineers working on the new Disneyland project styled the castle after the one in the film to help market it.

#4 The first Disney animated feature to be created for the 70mm format. Because of the increased attention to detail brought forth by the widescreen method, some character animators could only produce one sketch of their characters a day. To create one second of motion on film, 24 sketched pictures are required.

The original version, like Perrault’s fable, included seven odd fairies instead of three. In Perrault’s story, the seven fairies conferred beauty, wit, elegance, dance, song, and music. This was shortened to “beauty and song” in Disney’s Sleeping Beauty.

#6 The last animated Disney princess movie until “The Little Mermaid” Sleeping Beauty was such a flop at the box office (at least in comparison to the expense of production), the studio determined that princess movies weren’t the way to go. “The Little Mermaid”, released in 1989, was the first princess film in 30 years. This short is named “Grand Canyon” based on a 1929 musical suite written by American pianist Ferde Grofe. It was more of a live-action Fantasia part than a true documentary short, with no dialogue or narration. Its audacity, however, was rewarded when it won an Academy Award. 5 Best Answers For ‘Who Is The Baddest Female In Anime?’

20 Handsome Celebrities Who Were Totally Dreamboats In Their Youth

All About Celebrity Portrait Artist Of The Year 2022

The Unsolved Mystery Of Beverly: Any Updated Thing?