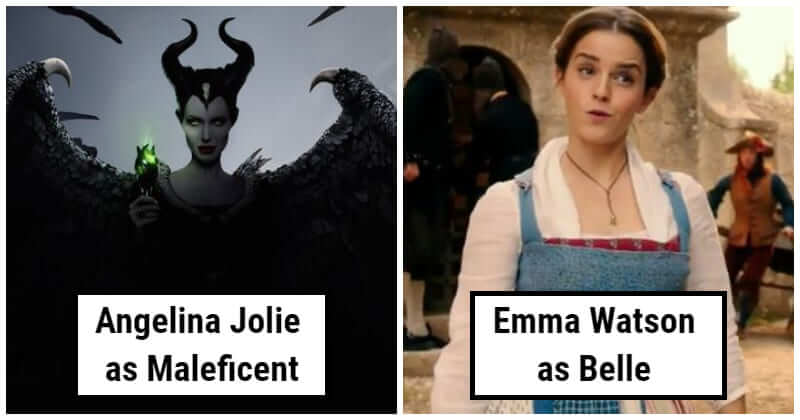 Whether you love them, despise them, or simply accept their existence, the Disney live-action remakes strive to make their animated characters a reality. Although some artistic interpretations differ significantly from the source material, one area where the studio cannot afford to make a mistake is in the casting department. You can’t make a movie without actors, and it’s even worse if you cast the wrong people, especially when it involves a remake of an iconic movie.

While some casting decisions were unexpected successes, others were simply made to play these iconic roles. There were some performances that were spot-on renditions, whether through makeup, special effects, or simply appearing like the characters. Here are 9 Disney live-action actors we’ve found that looks exactly like the original! Do you feel the same way? Let us know in the comments section! While Emma Stone is currently the reigning Cruella de Vil, Glenn Close in the ’90s version of 101 Dalmatians will always be the definitive live-action depiction of a Disney villain. After all, it was Close’s interpretation of the character that took her into the modern-day and transformed her into the devilish fashionista fans know today. Disney understood exactly what they were doing when they selected Angelina Jolie in the title role for her solo movie. Even without her horned suit, black cape, and glowing things, the talented actress was a strong contender for the role before production began. Jolie is a skilled actress who has played a wide range of characters during her illustrious career, but her portrayal of Maleficent is a drastically different take on the Mistress of All Evil, making for one of her most memorable portrayals. Some Disney actors, like Neel Sethi’s Mowgli, appear to have been plucked straight from the celluloid of animation stills. Sethi is nearly an identical duplicate of the original character from the 1967 animated film, which works quite well for him. His circumstances were unusual for most actors, as he was one of the few human performers actually seen, but he made the job his own. Mulan, Disney’s live-action remake, is undoubtedly the most innovative remake on the list, but it would be nothing without its star. Enter Liu Yifei as the title character, who combines the grace and elegance of an acrobat with the strength and skill of a seasoned warrior. Mulan may appear more restrained than in the animated version, but as she dons her armor, her true nature shows through. Although they were not human, the dog actors in Disney’s remake of Lady And The Tramp were nearly ideal for the eponymous roles. The team in charge of the animal cast members on the production actually nailed their casting to almost uncomfortably realistic detail, from their breeds to their colors. While they may not be able to sing and swing like the ones in the animation, they do help Lady and Tramp appear more anchored in reality. Although Jim Cummings does not appear on screen in Christopher Robin, he is the only person who Disney would trust to play Winnie the Pooh correctly. Anyone else would be a poor imitation of the man who has essentially been voicing the character for decades.

#7 Will Smith as The Genie (Aladdin) To be fair, no amount of Disney magic will ever be able to replace the genius that was Robin Williams. That being said, Will Smith’s performance as Aladdin‘s Genie was unquestionably the highlight of the film. Even with the famed blue CGI, his physical and vocal performances brought the character’s comical essence to life without a hitch.

#8 Emma Watson as Belle (Beauty And The Beast) She may not be able to sing like Paige O’Hara, but there’s no disputing that Emma Watson was an excellent choice for a live-action remake of Belle. Watson, yet another controversial decision, adds something new to the table as the literary heroine, but there’s no doubting that she fits into Belle’s blue peasant costume a little too well!

#9 Josh Gad as Lefou (Beauty And The Beast) Although there was some backlash over Josh Gad’s portrayal of Gaston’s comedic sidekick – Lefou – there’s no disputing that both the directors and the actor did an excellent job bringing him to life. Gad’s Lefou added a splash of color to the character and made him fiercely devoted to a fault. While he lacks the character’s bulbous nose and gapped teeth, Gad’s short and slightly portly frame, combined with Luke Evans’ Gaston, helps sell the illusion!

10 Characters From DC and Marvel That Would Become Best Frenemies

The “School For Good And Evil Ending Explained”: The Dagger

15 Celebrities Who Got Their Start Completely By Chance