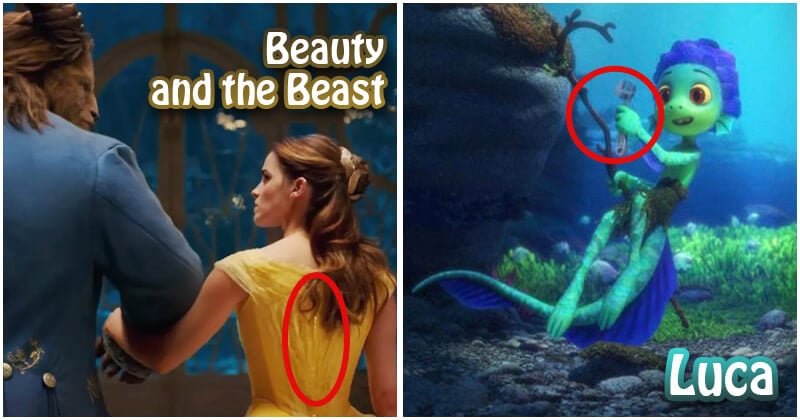 No script is perfect and sometimes, the more we rewatch our favorite movies, the more problems we realize. That’s also the reason why a subreddit named r/shittymoviedetails was born, and every day, people get to hear the most ridiculous and hilarious details from Hollywood blockbusters that 685k members of this community spotted!

Needless to say, Disney’s smash hits are of course not excluded. From classic animations like Beauty and the Beast or The Lion King to the newest 3D masterpieces like Toy Story, The Incredibles or Coco, there are so many weird things about the wonderful world of Disney/Pixar that Disneyphiles come across and decide to share with the Internet themselves.

In this post, we have rounded up 24 of the most upvoted Disney-inspired posts we stumbled upon in this interesting group, and we bet that they will make you burst out laughing for sure! Just scroll down and enjoy!

#1. In Pixar’s Up (2009) Carl and Ellie break into their Paradise Falls savings jar in order to pay for Carl’s hospital bill, this is actually a clever reference to the fact that the American healthcare system is literal garbage. #3. The dump truck from Cars 2 previously made an appearance in The Incredibles (2004). #4. The reason why the dad in Pixar’s Luca (2021) only has one arm is because considering that the movie is set in Italy in 1950, Disney needed an in-universe reason as to why he didn’t fight for Benito Mussolini in WWII. #6. In cars (2006) Lightning McQueen shows his dishonesty early in the film when he states “I am speed” when actually he is in fact, a car. #8. The film Coco (2017) is praised for its celebration of diversity, despite the fact that the vast majority of characters are white.

#9. Beauty and the Beast (1991) opens with Belle’s entire village singing a song about how beautiful, funny and unique Belle is. Belle, in turn, sings about how pathetic and simple the villagers’ lives are. This establishes that Belle is a stone cold bitch who thinks she is better than everyone else.

#10. In Zootopia (2016), in the laboratory of blue chemicals, two characters are referenced as ‘Woolter’ and ‘Jesse’. #12. In The Lion King (1994) they used Wildebeests instead of Bisons for the stampede because the name bison (bye son) was going to spoil what happens next. #13. In Toy Story, due to budgetary constraints, the animators had to reuse the character model for Buzz Lightyear for another character; Mrs. Nesbitt. They hid they’re subtle trickery with a hat an apron, but if you look closely you can see she is missing the same arm Buzz lost earlier on. #14. In Frozen (2013) you can see a clear example of Anna trying to coax Elsa out of quarantine. But Elsa understands the importance of staying in. Be like Elsa. #15. Disney didn’t get permission to use the Punisher logo on Sid’s shirt in Toy Story (1995). To avoid getting sued, they bought the rights to Marvel comics. #17. New Pixar film, Luca, teaches children to throw garbage into the ocean so the sea monsters can have cool toys. #19. And rats can’t get heartburn either. #20. In Toy Story 4, Bonnie names her toy “Forky”, even though he is clearly a spork. This shows that she is not very intelligent, later demonstrated when she cares more for a fucking utensil than a badass cowboy voiced by Tom Hanks. Andy trusted her! And this bitch treated my childhood hero like shit.

#21. In Beauty and the Beast (2017) which was set in the late 1300’s, Belle’s dress includes a zipper, which wasn’t invented until 1893 proving that Belle is indeed actually the infamous witch Hermione Granger playing with time travel for her own pleasure, risking the existence of our timeline. #22. In “Inside Out” (2015), Riley wears a yellow jacket. This is foreshadowing the events of “Kill Bill” where she wears the same attire #23. The common misconception behind Frozen II (2019) is that it’s Frozen 2. The truth is that it is Frozen 11, as my annoying ass nieces forced me to watch the first Frozen 10 times.

#24. In Monster’s University (2013), Mike and Sully meet for the first time in college, despite Mike saying in Monster’s Inc: “You’ve been jealous of my good looks since the FOURTH GRADE”.