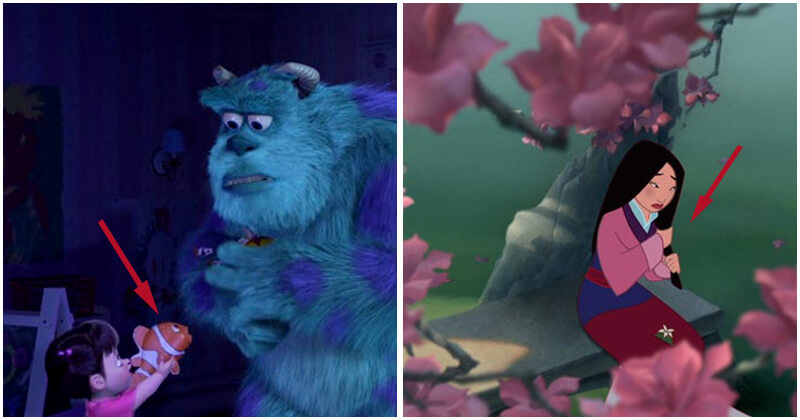 No one can know everything about their favorite movie, no matter how much they love it and how many times they have watched it all over again. However, it’s always a fun experience to dig a little bit deeper into our most beloved cinematic works and discover an Easter Egg or some interesting detail we haven’t noticed before. Seriously, they can make us fall in love with these masterpieces way more than we already did!

So, Disneyphiles, are you sure that you understand your Disney movies well enough? In this post, we have collected 30 hidden details in Disney/Pixar films that numerous fans have missed, as shared by the wise members of the r/MovieDetails community. From classic hits like Mulan or Hercules to the recent blockbusters like Coco or Soul, Disney filmmakers always know how to wow the audience with the smallest features. Just scroll down and have a look, we are sure that they will make your day!

#1. Mulan (1998) only has musical numbers for the first half, until the characters find the destroyed village. From there on songs were avoided because the tone was meant to be darker. #3. In Finding Nemo (2003), Gill is a moorish idol. This species is known to not handle captivity well, so him being the one who constantly comes up with escape plans makes sense. #4. In The Incredibles (2004), when Helen arrives to rescue Bob and punches Mirage, you can see that Helen attempted to punch Bob too, but he dodges it. #6. In Inside Out, the pizza toppings were changed from broccolis to bell peppers in Japan, since kids in Japan don’t like bell peppers. Pixar localized the joke. #7. For Monsters Inc. (2001) due to Mary Gibbs who played Boo being so young, it was difficult to get her to stay in the recording booth to perform her lines. So they decided to follow her around with a microphone and cut her lines together using the random things/noises she say whilst playing. #8. Chicha from The Emperor’s New Groove (2000) is the first pregnant female character to appear in a Disney animated feature film, according to the DVD commentary. She’s also one of the first mother characters in a Disney film not to be killed off or villainized. #9. In Up (2009), Dug is the only dog to successfully track down the Tropical Bird because he is the only Hunting Dog (Golden Retriever). All the others are Guard Dog breeds. #10. In Zootopia (2016), Chief Bogo wears eyeglasses to read documents. This is a reference to the fact that buffalo have poor eyesight. Confirmed by the directors in a Q&A. #11. In Ratatouille (2007), the ratatouille that Rémy prepares was designed by Chef Thomas Keller. It’s a real recipe. It takes at least four hours to make.

#12. In Tangled (2010) Mother Gothel says “I love you the most”, while kissing Rapunzel’s HAIR instead of her forehead. #15. In Mulan (1998), Mulan touches her hair a lot because the animators noticed that Mulan’s voice actor, Ming-Na Wen, touched her hair a lot while recording. So, they added it to the character. (confirmed by Ming-Na Wen on twitter). #16. In Monsters University (2013) power comes from screams which appear as a gaseous state in the scream tanks. Because power here is a gas, light switches are valves and instead of wires there are pipes. #17. In Toy Story 4 (2019), a closer look at Buzz Lightyear shows that his stickers are slowly starting to peel away. #21. In Wreck-it Ralph (2012), Bowser holds his cup of tea in a particular way. This was actually an addition by Nintendo. Before the film was released, they contacted the filmmakers and said that Bowser was drinking his tea the wrong way in the group therapy scene. So, it was changed.

#22. In Coco (2017), Héctor spends the movie with torn clothes and without shoes. It’s only at the end when he is welcomed back to the Rivera family that his clothes are clean and has access to the family’s legacy: shoes.

#23. Disney’s 1940 animated film Fantasia shows the dinosaurs dying off as the result of intense drought. The theory of mass extinction as the result of an asteroid strike wasn’t proposed until 1980. #24. In The Princess and The Frog (2009) the villain’s shadow turns this wallpaper into skulls and crossbones. #25. In The Jungle Book (2016) King Louie is a Gigantopithecus, a huge species of ape believed to have gone extinct 9,000,000 – 100,000 years ago. The only recorded fossils of this creature are the jawbones. The change was made from the 1967 film because orangutans are not native to India. #26. In Toy Story 4 (2019), Mr. Potato Head is voiced posthumously by Don Rickles (who passed away in 2017). The Pixar team mined through more than two decades of Rickles’ voice sessions, outtakes for other films, theme parks, toys… to piece together the performance. #27. In Zootopia (2016), Mr. Big, the mafia boss, is an Arctic Shrew. Director Roy Moore made this choice because “the arctic shrew is the most vicious predator on earth”. Arctic Shrews eat three times their own body weight and even eat other shrews. #28. In The Incredibles (2004) there is a clear reference to Die Hard 3, the scene of the phone with Samuel L. Jackson, who also plays Frozono, and the policeman #29. In Toy Story 4 (2019), a car has the license plate “RMRF97”. In 1997, someone at Pixar accidentally typed “rm -r -f “, deleting the entire Toy Story 2 movie from the Pixar database. Fortunately, the film’s supervising technical director had a backup copy at home, and the movie was restored. #30. In The Incredibles 2 (2018), the painting in Helen’s hotel room is an illustration of her separation from the family.