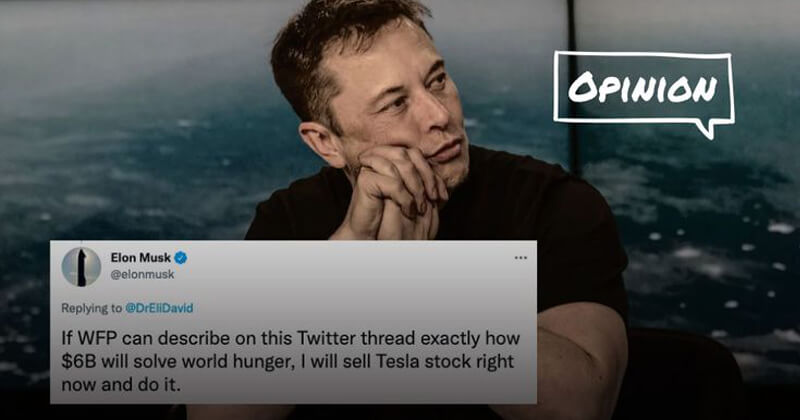 Are we simplifying the complexity of hunger? Media and the public are having another occasion to call upon billionaires to donate. Some even went on further to say that it’s their responsibility since they have already “taken” too much of people’s money to accumulate their capitalist empire.

Despite that, let’s look over whether who is right or wrong because we have an even better question: Would it be too naive to think that we can just use money to end world hunger?

In 1998, Amartya Sen received a Nobel prize in Economics for his research of the cause of world hunger. In his research, the real culprit here is political conflict and economic inequality, which directly link to food supply mechanism. The reason is entirely not about food shortage, which can be easily solved with money.

In reality, Beasley himself said that the $6 billion that he suggested can’t end world hunger. It is only just to save 42 million people who are in critical conditions.

Why does world hunger exist?

In economist Amartya Sen’s theory, world hunger happens when people’s entitlement is affected by factors out of their control. For example, in the normal conditions of the market economy, a cotton farmer can keep some of his cotton to make clothes and sell the rest to get money to buy the rice farmer’s rice. He has the full rights to decide what he should do to live the best life – and with a full stomach.

However, his entitlement can be affected by 1001 outside factors, like the supply – demand equilibrium changing, making cotton prices go down, pests ruining crop, the government being corrupted or carrying out wrong policies, maybe even war happening making the supply chain being discontinued,…

All these factors can affect the rights to access food, might result to him dying from hunger, while his rice farmer neighbor isn’t farming any less.

This is just a basis example, showing that world hunger never happened due to the lack of food, but because of the combinations of many different causes. A lot of them are big and global, like the market economy or the political system – which can hardly be affected or change on a bigger scale. Despite that, we can’t blame it all on those reasons because we human are relying on it to operate our civilization. Market economy, or a sweet trap?

In the famous book ‘Wealth of Nations’ that every economy major has to study, Adam Smith said “Wherever there is great property, there is great inequality. For every very rich person, there will be at least five hundred poor, and the affluence of a few means the discontent of many others.”

Adam Smith – who is widely acknowledged as the father of market economic theory makes perfect sense when he says it. That is because capitalism can produce goods, but cannot efficiently distribute human needs. But one of the human needs – which we call “greed” – is to get rich. On a national scale, it’s economic growth.

Goods cannot be distributed to places that do not generate growth

To serve market demand, Americans have drained underground wells to grow food in the desert. Because the market wants to eat fat cows, they also grow inedible corn varieties for fattening them. These foods are processed and then filled into containers that are distributed throughout the United States and the world.

Americans do all those hard things, because they know they can make money from the market’s need to eat. But that market does not include the poor even though they also need to eat, simply because the poor do not have money to pay.
It’s true, because even though the US is the richest food exporter in the world, there are 38 million Americans struggling to fill their bellies. However, the government can hardly do otherwise. Because if it affected the choices of those Americans who grow food in the desert, there could be even more people in poverty.

When we talk about inequality, we tend to blame governments for corruption, and the rich for taking away so much of society’s wealth. But research by Amartya Sen shows that: the market economy, which we are operating is also the agent. That’s because the market affects the options of so many other people, including access to food. Each of us is a participant in the market economy, and it works as follows. Essentially, farmers are the creators of the food, and supermarkets or restaurants are the distributors. However, rice and maize are not sold directly from farmers to supermarkets.
Most supermarkets are not concentrated in rural areas, so this food is sold by farmers to transport and logistics units. They are responsible for bringing food to places where there are more buyers – mainly us, urban consumers.

It takes a lot of transport units to bring that food to all the places where many people want to spend money to buy it. And after adding wages, profits and taxes, the price of 1 kg of rice sold at the supermarket is many times higher than the price the farmer sold at the beginning.
So can we say why not give that food to the poor, when all the consumers, rice farmers, transporters and supermarkets do is consume and get rich or not?

Making donations the wrong way also contribute to world hunger, not ending it.

At this point, we might think that money may not end hunger, but if we spend money we will still help hungry people get more food. So calling for finance is still the best solution.

This doesn’t make any sense, because even if money is paid to solve the macro problems that affect hunger, it’s still difficult to measure the results. What formula can make sure that 6 billion USD will help prevent global political instability and mass migration as Mr. Beasley says, when these are problems that the whole world has not yet solved in the past decades?

The other solution, which thinks that money can be used to donate as many necessities as possible to the hungry, is also not a sustainable solution, as it destroys the local economy, making people dependent. In other words, donating can solve hunger, but not poverty.

Going back to the example we had above. The farmer is  growing cotton daily and weaving clothes, making a living from selling products to local people. Since it is a land of poverty, international aid shipments kept landing. The local market was suddenly flooded with free food and clothing. And then what happens? People starting to get free items, and stopped buying the farmer’s clothes. He couldn’t sell them, so he became poor. What if he needs money to take his parents to the doctor and send his children to school, but all he has is a warehouse of clothes?
Such phenomena are still present. Used clothes cost Africa half of the jobs in the garment industry between 1981-2000.

The food aid for the poor here is even criticized. It causes African farmers to find other jobs because they cannot compete. Worse, it fuels corruption and undermines an already fragile economy.

To tackle hunger, Amartya Sen and many other contemporary studies have shown the optimal solution. Accordingly, hunger can best be prevented and controlled when markets are allowed to function, but governments must intervene in appropriate ways.

To correct the error of the market economy, private businesses should be allowed to transport food into the affected areas. Governments also need to increase the purchasing power of the poor, through direct relief or job relief programs.

These solutions create sustainability, when the poor have just been supported with food, but their fishing rods are still newly created and guaranteed.

Tackling hunger has always been a priority of the times for the world, though it has never been easy. Still, we can look ahead with confidence, knowing that the number of people in hunger worldwide has been steadily decreasing over the years.