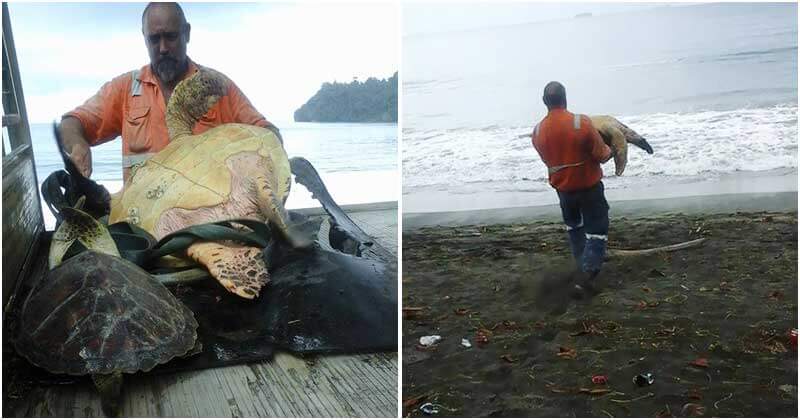 Family pets like cats and dogs can change their lives forever if they are rescued in time. When they are struggling for their survival, their saviors come and bring them a second chance for life. Is there anything more precious? Not only do these animals need rescue, but many wild animals and marine creatures also wait for human concern and help. They may end up in black markets for fur or local markets for food. We can’t change the world but we can afford kindness in our community. Small acts of kindness work tremendously when many people take hands together.

This is the case of Arron Culling, a kind-hearted man from Greymouth, New Zealand. He and his co-worker changed the fate of two sea turtles in Papua New Guinea. These creatures would serve as a fine meal unless two men come to help them. As you may know, marine turtle fishing is still legal in much of the world. In Papua New Guinea, coastal communities harvest turtles for their meat and shells.

What did Arron and his friend do? They bought the freedom of those two lovely turtles for fewer than 40 U.S. dollars. They then set them free. Two men drove 5km up the road and released the turtles back to where they belong – the sea. These two turtles aren’t the first turtles that the men have saved. They have bought and released about 10.

Arron later shared photos of his rescue operation on social media. It gained millions of likes and shares worldwide. He hopes that these can improve the awareness of people about the harsh situations of sea turtles. Six of the world’s seven sea turtle species are classified as endangered or vulnerable. If you love this article, just share it with your family and friends!

Mean Boss And Co-workers Against Dog Allergic Young Woman: Put Up With Dogs At Office Or Stay Home!

This Baby Mutant Horse Was Born With Spots Instead Of Stripes