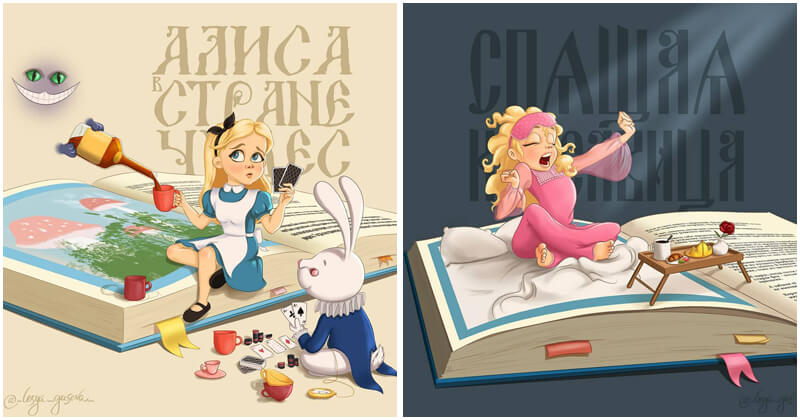 If you are a Disney hardcore fan who is looking for some adorable pictures to brighten up your day, then this winsome collection is right up your street! From Rapunzel struggling to remove her hair from the tower to Ariel wringing her hair after getting out of the water, these princesses are just so cute they will definitely win your heart within a few seconds! And especially, with a book open wide right next to them, they all look like they have just walked straight out of a fairy tale. Isn’t it sweet?

The artist behind these captivating paintings, Lesya Guseva, is a pretty famous illustrator from Perm, Russia who has over 109k followers on Instagram already. In addition to designing her own characters, Lesya also enjoys making fanart of her favorite fandoms like MCU, DC, or Disney. If you visit her page (and we believe that you should), you surely will fall in love with Lesya’s lively, delightful and fascinating style of art. But before you do so, just scroll down and enjoy the 7 fantastic Disney-inspired artworks below as well as the hilarious coversations behind them! This 7 am is disgusting! It’s so great lying in bed with your nose buried in the pillow, wrapping yourself with a soft blanket. Just leave your heel outside (for thermoregulation however). Sleep masks and earplugs are even more perfect! Incredible feeling! Total relaxation!

Everything changes (meaning “shatters into pieces”) when here comes … the Prince! And starts waking you up… shaking your shoulders… sticking with slimy kisses… asking to marry him. I haven’t watched my dream to the end!! Who cares that I’ve slept for a hundred years! I could have slept five more minutes. Nothing could have happened! So only coffee in bed saved you, get it straight!

#2. Snow White from “Snow White and The Seven Dwarfs” What do you know of kitchen slavery! You think you have a hard time? Imagine you got 7 men instead of one!!! Seven adult (though small) men in the house!

Go make something to eat for all of them by the time they return from mine! (With soup, main course and dessert). Set the table! Wash clothes for all of them! Then iron! You don’t know how bullying it is to put 7 blankets in 7 blanket covers!

God! And socks? You complain that you can’t collect your man’s socks in pairs? Then multiply the amount by seven!!! There are mountains of socks… Why not just buy matching socks for all of them?

You think I sit here around diamonds and gold? No way! I can’t wait for my stepmom to bring me a poisoned apple. For I could get enough sleep in a crystal coffin.

#3. Belle, Lumière, Cogsworth, Mrs. Potts and Chip from “Beauty and the Beast” – But he is three times bigger than you!

#4. Alice, White Rabbit and Cheshire Cat from “Alice in Wonderland” Now I have to sit and play poker with him all day and night. Because the rabbit does not know any other card games …

By the way, do you know that they are not driving tea here at all ?! Bourbon is whipped all day! But from mugs. In order not to get scorched (the fairy tale is still childish).
When I found out about this, everything fell into place, straight! And Humpty Dumpty on the wall, and the roses painted over with paint, and that flamingos are playing cricket, and the Mouse sleeping in the teapot … Good bourbon! Zaboristy.

The thought creeps in that the caterpillar with the hookah is also not baked. I’ll have to visit her. We will only finish the game.

#5. Ariel from “The Little Mermaid” Is there justice in this world ???

Why, one gets everything, but the little mermaid (I’m talking about myself now), as usual, is out of work? ⠀

I want to play football! And they only take me to the water polo team: (I want to marry a prince! And not only the prince does not shine for me, but the dolphin, they say, is not a couple…)

They even came up with a name, like some kind of washing powder !!! Well kapets! Crawling up and down my hair

It is so convenient for them, you see!

They are too lazy to climb the stairs! The tower, you see, is high! There are many steps!

Found the elevator, damn it! ⠀

And how much shampoo is spent on these Cosmas, can you imagine ?!

Yes, in the coffin, I saw this hair and your fairy tale!

I’m going to the hairdresser! Do not wait. Good for you, Hood. At least you are not portrayed as the last villain and murderer!

And what is all this for me?

By the way, I’m from a decent family … I got a higher education! He is married to the most beautiful she-wolf, with whom we are raising three children …

But this crisis in the forest has confused all our cards. I had to take on any job. The mortgage will not pay off itself, and the children need to be fed …

And he worked as a watchman, and as a loader, even as a taxi driver for a short time … now here … in a fairy tale I work part-time … (sighs heavily)

By the way, did you know that it was written based on real events that took place in 1589 in Bedburg? But in fact, it wasn’t the wolf or the werewolf that was to blame. And the farmer who turned out to be a serial killer and psychopath! Peter’s name seems to be … What a fairy tale, eh?

They say the maniac was worse than Chikatilo.

And that’s where the justice is? Why, just the wolf is extreme? What do these storytellers even allow themselves ?! Eh …

Do you have pies with meat or cabbage? Okay, I persuaded, give one. And then he got hungry, already rumbling in his stomach.

Can’t Wait For Christmas? Enjoy These 15 Funny Christmas Illustrations To Boost Your Excitement

If You Are An Office Worker, Here Are 23 Funny Comics You Painfully Relate To