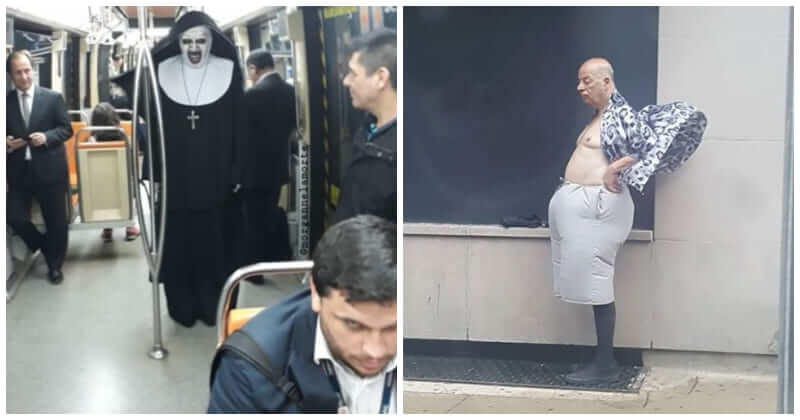 The subway, of course, is a magical place where all the laws of normality stop working properly. Ask anyone who lives in a big city and has to take the subway every day, that is possibly one of the worst things to do. Normally riding the subway means you’ll be packed in a tiny car that shuttles you to your location. However, when it gets worse, means having to deal with weirdos, rude, crazy people that randomly appear from nowhere to bother your little peaceful moments. Nonetheless, not every single disturbing thing is bad. If you are lucky enough, you will see that a lot of them are bizarre but absolutely hilarious. And it’s completely worth the trouble.

To keep your good mood all day long as well as to remind you that life is not that boring or typical all the time, instead, it is full of insane surprises. We have compiled 25 entertaining pictures of comical moments that people, fortunately, caught on the subway. Let’s get started. Hope after this post, you will make the most of your MetroCard in the future.

#1. This guy has a turtle shell backpack #2. Poor the guy on the right, he’s holding his breath, hoping they won’t notice him #4. A subway in Seoul had been converted into a grocery store #8. Doggo: these seats are way too small. How’s a fella supposed to sit? #9. Someone’s enjoying their evening commute… or not #12. It’s good that it isn’t an advertisement for hemorrhoids #13. Tiered of flying from Brooklyn to the central park daily #14. More concerned about the guy on the bottom right tbh #16. The lady is certainly amused #17. Just another day on the subway #18. Looks like Ted Mosby trying to be Tony Stark #20. This knight probably just lost his horse to the enemy that day #22. It’s literally the last thing she would have thought she’d sit next to #23. I choose you Charmander, to protect my virginity Someone Inserts Mr. Bean’s Face Into Celeb Photos, And The Results Are Simply Hilarious This Artist Shows Us What Popular Cartoon Characters Look Like In Reality, And The Results Are Incredible

15 Unique Ways Disabilities Enjoy Halloween That Will Totally Amaze You

20 Times When People Celebrated Just A Little Too Early

13 Country Traditions That Are Completely Weird To All Other Countries