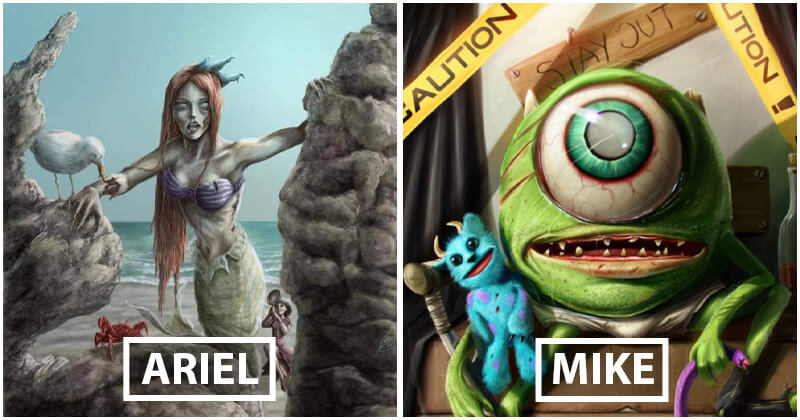 Since founded in 1923, Walt Disney has conquered audiences of all ages with its engaging and meaningful animated films. Disney’s classic characters such as Mickey Mouse, Snow White or Ariel even become not only childhood memories of many people but also an endless inspiration for countless artists around the world. Over the past 100 years, there have been millions of artworks relating to Disney animations and they’re showing no sign of slowing down.

Of all the creative drawings about Disney characters, the haunted and horror style is definitely the one that attracts the most attention. There are many talented artists who are from all walks of life who share the same passion for Disney movies and creepy art, and they have created brilliant drawings reimaging the adorable and friendly Disney characters with spooky appearances. And as Halloween is around the corner, why don’t we take a look at these amazing artworks? I’m sure that Zoombie Snow White or Monster Mike Wazowski will definitely make your nightmare come true.

Aren’t you bored with the same sweet appearance of Disney characters? Do you want to see a totally new version of them all? Scroll down to check these fanarts out!

#1 Ariel from “The Little Mermaid” Just stay away from the beach, you don’t want to stumble upon this Ariel.

#2 Snow White from “Snow White and the Seven Dwarfs” Mirror mirror on the wall. Who is the evilest of them all? Where is my adorable Pooh? Jasmine and her magic carpet are coming for you!

#5 Belle from “Beauty and the Beast” Beauty or the Beast? No, both. Oh, is it already 12 o’clock at night? It’s time Cinderella transformed into a zombie. This masterpiece is from “Inhuman anatomy” series of Alessandro Conti. Goofy the butcher is Mickey Anatomy’s number one comrade. These two zombies surely freak everybody out. I believe that with this creepy image, Mike Wazowski will be the best monster.

#11 The Beast from “Beauty and the Beast” This is such a masterpiece! Guess what would happen if Prince Phillip never found Aurora? To be honest, I would not dare to make my wishes if Genie looked like this. This is what Pinocchio would look like if he was created by an evil wizard. Bambi is forced to be evil in order to survive in the jungle. I will never see Minnie as the way she is from now on.

14 Hilarious Moments That Describes Perfectly The Differences Of Two Genders