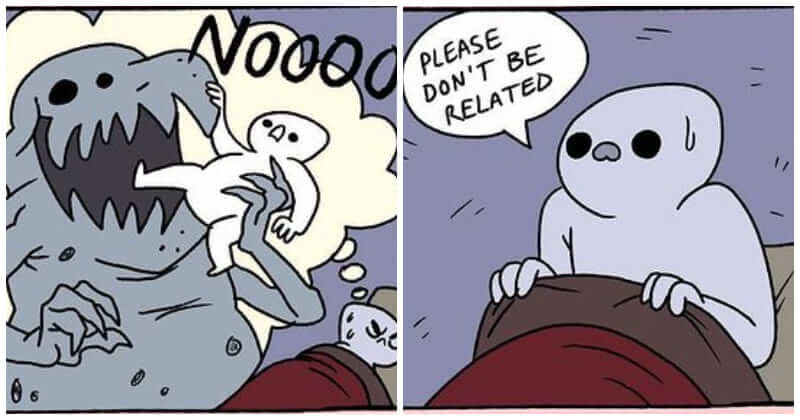 After a long day at work, many people usually come home, lie down on the couch, turn the TV on for background noise, and scroll through their phones to read comics. Reading comics has been a good way to reduce stress and keep yourself positive. Especially, most people like comics with unexpecting twists and turns because they’re often very short, relatable and people are able to burst into laughter immediately.

Below we’ve rounded up a collection of hilarious comics by ToothyBj. With more than 127,000 followers, he is quite famous on Instagram. His artwork is often deliciously witty comics that are mostly liked by dark humor lovers. If you are interested in that kind of comic, scroll down and enjoy!

#1 “End your life and leave the pineapple” #4 Are many kids sharing the same fear? #5 A human’s heart is going to stop beating #6 Almond must burn the candle at both ends #8 Pick up some ideas #9 “Welcome to your new world. Here you can choose your life” #15 “We’re getting bigger together, bro” #20 What country owns the aliens? 21 Hilarious Pics That Demonstrate The Importance Of Kerning

People Are Roasting Airbnb For Its Out-Of-Control Behavior, Here Are 20 Of The Most Savage Tweets

People Are Sharing Things That Once Signaled That You Were Rich, But Now Tell That You’re Broke

19 Times People Call Their Neighbors Out For Absurd Reasons

20 Funny Comics With Unexpected Endings That Will Get You Hooked