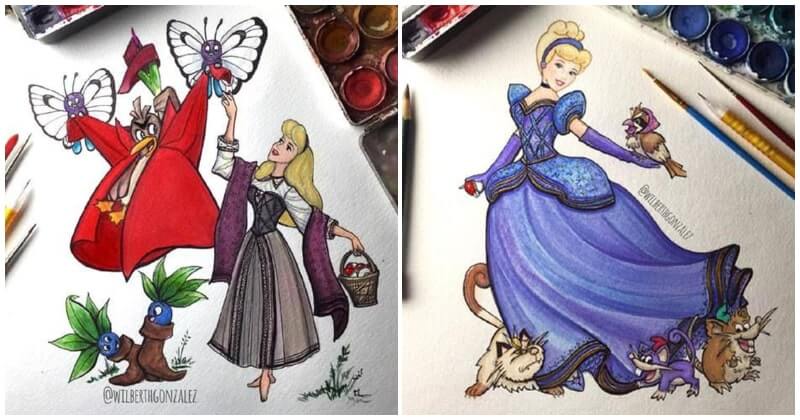 Pokémon and Disney are two giant empires in the animation industry that have a huge and loyal fan base who are always ready to support their movies unconditionally. There are many people in the world who not only love Disney movies, but are also obsessed with adorable Pokémon creatures as well! However, these two universes are very separate and do not interact with each other despite many fans wishing for a crossover between them.

If you are one of the aforementioned fans then you definitely cannot ignore these amazing fan arts of Wilberth Gonzales below! Inspired by the #mystylechallenge on Instagram and his immense love for both Disney and Pokémon, Gonzales came up with the genius idea of combining these two fandoms, and the results are simply breathtaking. His paintings give us a visual representation of many Disney princesses becoming Pokémon trainers, and they quickly go viral right after being shared online!

It is not an easy opportunity to see the intersection of these two universes, so let’s seize your chance and take a look at these incredible fanarts of Gonzales! Is this drawing fascinating enough to take your breath away? This horse must be familiar to the audience of “Tangled”. The peaceful atmosphere in this picture is amazing, isn’t it? This picture shows the wild nature of both Pocahontas and her Pokémons.

#5 Snow White from “Snow White and the Seven Dwarfs” Who else could be more suitable to be Snow White’s Pokémon than the dwarfs?

#6 Ariel from “The Little Mermaid” Cinderella’s furry Pokémons will definitely help her win every match. Merida and the Witch? You surely didn’t see it coming, right? 20 Funny Comics With Unexpected Endings That Will Get You Hooked