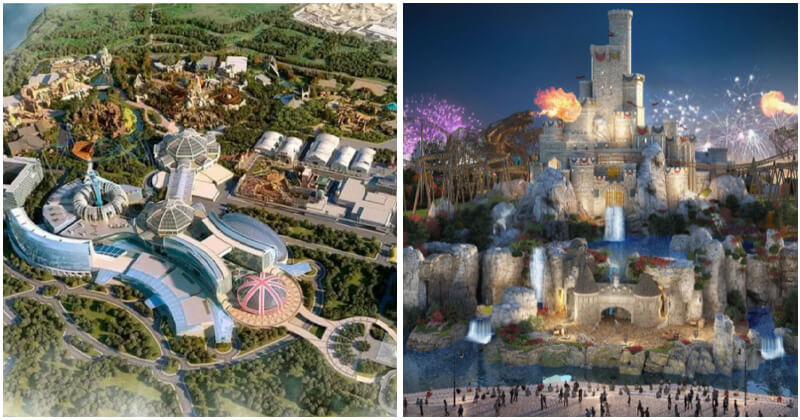 Have you heard the terrific news about “UK Disneyland”? WOW, just imagine that you would not only see the magical world of Disney animation in the flesh but also experience the feeling of getting lost in this immense theme park in no time. The great plans have finally been conducted and are about to reach the pivotal public consultation phases. A glimpse of this entire park has been revealed already, just look at it and you have to admit that it will definitely be a huge hit!

This theme park, one of the projects set in a London Resort site, has a massive investment value of £3.5 billion (approximate $4.3 billion USD). When it is completed, it’s going to surpass Disneyland Paris in terms of area and be the ‘largest construction project in the whole Europe continent’. The park’s total area is seven million square meters and it will take only 17 minutes for you to get there from St Pancras Station in Swanscombe, Kent. Lying on the poetic bank of the River Thames, the UK Disneyland promises to give you one of a kind immersive experience.

After a deal with Paramount Studios, as well as rides from BBC and ITV shows, rides in Paramount films will also be featured here. According to the resort’s website, when complete, it will be “three times larger than any other park in the UK”.

“Two theme parks and a resort water park will be set over 535 acres, the equivalent of 136 Wembley Stadiums. A bespoke entertainment district, including the provision of 3,500 hotel rooms, will be devoted to a full suite of hospitality experiences. There will be something for every generation and food and drink for every taste,” it wrote.

“But it’s the rides and the experiences which will take The London Resort to another level. Brands from across literature, television, music, film and entertainment, are being hand-picked to create unique experiences never previously imagined.” After the public consultation, plans will be submitted for planning permission at the end of this year with hopes of kicking off construction next year on the 535 acres in order to officially open the first park in 2024,  and the second one in 2029.

“This is a significant step in transforming an amazing and ambitious dream into reality,” said Gerbeau, the chief executive of the project. “We obviously can’t hold a public consultation in the normal way – but we will make sure we reach out to local residents and businesses as well as the wider community and stakeholders.” “We are talking to Government about how we will be using digital technology, websites, video conferences and online Question and Answer Sessions,” he added.

The resort is planned to consist of seven themed zones in total: The Woods, The Studio, High Street, Starport, The Jungle, The Isles, and The Kingdom.

The site equals 136 Wembley Stadiums and 70 percent of its housing will be undercover, which will make it weatherproof.