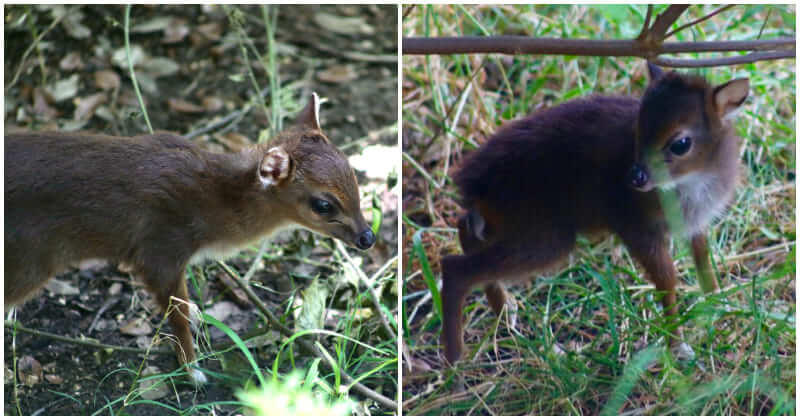 Open year-round and is home to more than 3,000 animals (750 species) from around the globe, San Antonio Zoo is an appealing destination for family weekend trips. Recently, the zoo is so excited to announce its newest addition. A baby duiker was born at the zoo on the 28th of June. The tiny creature is named Viazi by the zoo, which means potato in the Swahili language. Viazi is doing really well now and is busy exploring his new habitat.

You can watch the video of the playful kid below!

Duikers are endemic to sub-Saharan Africa. They have dark, glossy coats and tails with some white hair, creating a striking contrast with the dark body. These animals are hard to spot in the wild. They often hide under dense covers and avoid open grassland without shelter. This species has two groups, one lives in forests, and the other inhabit bushes. Noticeably, habitat can influence their overall body shape and coloration. Specifically, bush duikers have longer legs and can run fast for long distances.

Duikers are most active during the late afternoon and at night. They feed on a variety of food, including leaves, bushes, fruits, pods, seeds, flowers, fungi, and insects. Regarding the breeding season, female duikers give birth to a baby or twins after 6 months of pregnancy. To keep them safe from predators, females hide in dense vegetation when they are close to giving birth. Interestingly, newborn duikers can run within 24 hours after birth. Duiker is now an endangered species. Their population has decreased dramatically due to the loss of habitat to the expansion of roads, settlements, and agriculture. Poaching is another critical threat that these animals face. They are hunted for their meat, skins, and horns. Additionally, some bush duikers are hunted as they feed the crops.

Woman Called Out For Serving Her Mother-In-Law Dog’s Water, But Redditors Seemed To Have Fun With It

5 Dangerous Animals Under The Sea You Should Know

Are Rats Cuddly? These 5 Facts Will Change Your Mind About Rats

Twitter User Finds Out He Is Surrounded By Secret Cats In His No-Pet Apartment Building, And Netizens Are Sharing Their Pet Hiding Stories