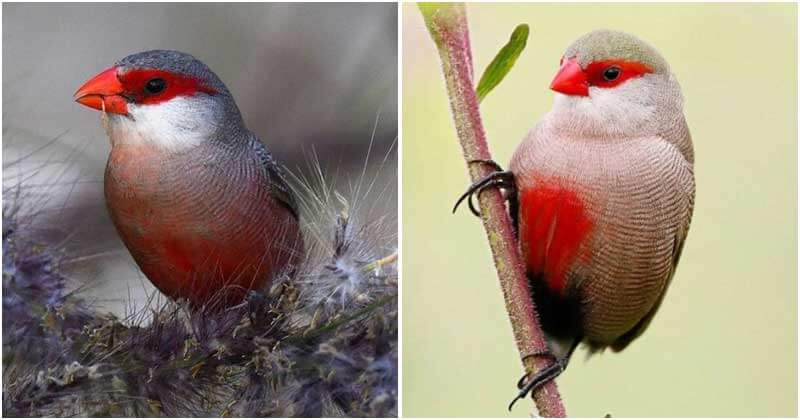 The world of birds is amazing! You can find many species whose beauties go beyond the words used to describe them. They are stunningly beautiful with one-of-their-kind plumage. Some people think that these birds can only be seen in Disney cartoons. The fact is they do exist in nature. When they appear, they can mesmerize all lifelong bird watchers, bird photographers, and normal people like us. The common waxbill (also the St Helena waxbill) is among these captivating birds. The vivid red bill and eye mask are enough to make this species conspicuous in nature. Additionally, the back and wings are covered in gray with striking gray-brown barrings. Meanwhile, the chest and belly are pinkish-beige, barred dark grey on the flanks. The striking feature of the lower parts is an elongated, highly visible, bright red patch at the middle of the belly. Such a charming vivid bird! The female and the male of this species are quite distinguishable. Her plumage and red patch on the belly are paler. Young birds are dullest as they lack or have a less red belly patch. You can watch the video of this bird below!

The common waxbill is a small passerine bird of the estrildid finch family. They are native to sub-Saharan Africa but now can be found in many parts of the world. Regarding the habitats, these birds prefer living in dry and well-grassed areas with shriveled shrubs. But they also like open pastures, urban areas, forest edges, and clearings where they frequent.
This species feeds mainly on seeds foraged on the ground. But they also hunt flying termites if they are available nearby. During the breeding season, they use a weaved, spherical mass of grasses to build nests. This nest is placed on or near the ground, hidden in similar, grassy vegetation. Interestingly, it has a built-in tunnel-like entrance and a roost built above the nest itself for the male’s use. The female then lays 4-6 eggs in her nest and incubates them with the support of the male for around 10 days. Both parents feed and care for the chicks until fully-fledged, for around 21 days.