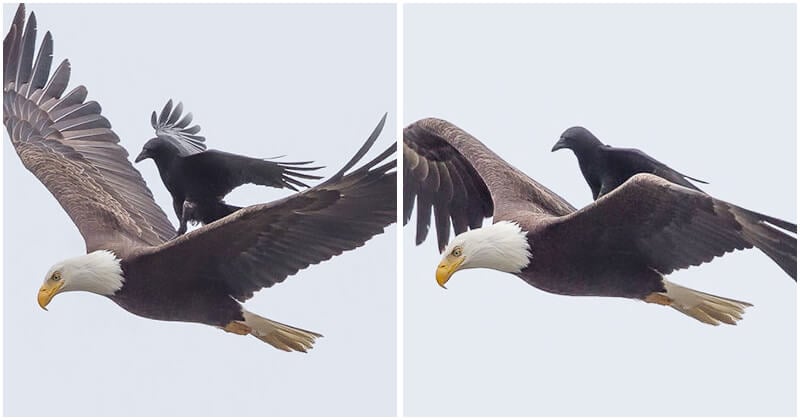 Okay, let’s be honest, who wouldn’t want to fly on the back of an eagle anyway? That idea just sounds so tempting and clearly this brilliant crow also thinks so. The mischievous critter was spotted enjoying a free ride on a bald eagle’s back and the funny thing is, that eagle itself did not seem to mind at all. Thankfully, talented California-based photographer Phoo Chan managed to capture that once-in-a-lifetime moment and shared it with the whole world. Explaining the crow’s unusual behavior, biologist Kevin McGowan – who specializes in crow behavior at the Cornell lab of Ornithology – states that it’s actually pretty normal for territorial birds like the crow to feel threaten and could even become extremely aggressive when a huge intruder shows up in their natural habitats. The reason behind such reaction could be the “Napoleon Complex” – a theorized inferiority complex that is often attributed to people of short stature.

Apparently, the angry crow did prepare for a fight. But for some reason, it simply had no idea what to do next after landing smoothly on the big bird. “This would be kind of like a dog chasing a car and jumping up on it,” says McGowan. “Dogs always want to catch the car, but they never know what they’d do if they get it.”

According to McGowan, the bald eagle’s nonchalance is completely understandable either. As the largest predatory birds, eagles are always harassed by other birds and they actually don’t think of it as a big deal. Just like McGowan stresses, it just feels like they are “being followed by mosquitoes”. Chan, however, doesn’t seem to agree that the crow was trying to harass its “vehicle”.

“Crows are known for aggressively harassing other raptors that are much bigger in size when spotted in their territories and usually these “intruders” simply retreat without much fuss,” says the bird and nature photographer. “However, in this frame the crow did not seem to harass the bald eagle at such close proximity and neither did the bald eagle seem to mind the crow’s presence invading its personal space.” “What made it even more bizarre was that the crow even made a brief stop on the back of the eagle as if it was taking a free scenic ride and the eagle simply obliged,” he continues.

Please share these amusing photos with your friends and family!

Dog Sees Tiny Kitten Having Trouble With The Stairs, He Goes To Help And It’s Beyond Adorable

10+ Surprising Things Animals Can Do That We Can’t Explain

Shelter Cat Noticed The Human She Loves The Most And Gets Very Excited!