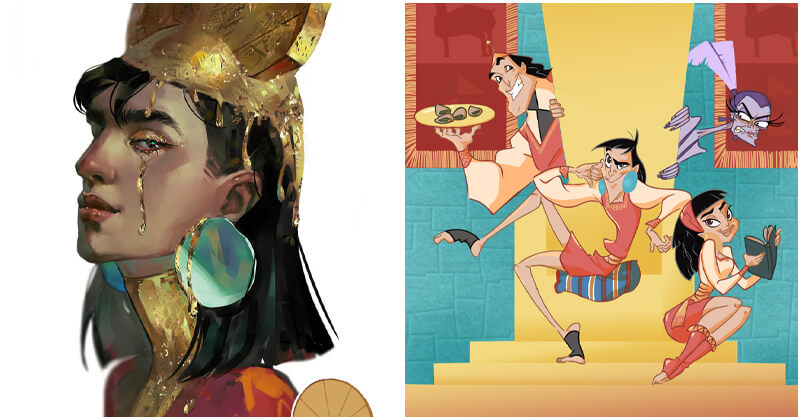 It’s been two decades since “The Emperor’s New Groove” was officially released to the public in 2000, and the funny story about an Emperor turning into a llama, struggling to regain his throne has never stop winning the love of both kids and adults around the globe after all that time. Featuring a highly appreciated screenplay and a very lovely style of art, this fantastic work of Disney is truly an outstanding comedy that is well worth a watch with your family on any occasion.

To celebrate the 20th anniversary of this top-notch animation, we are glad to introduce to you 30 excellent artworks from hardcore fans of the movie that we find super alluring and fascinating! Hopefully, these charming pieces of art will bring you as much joy as they do with us. #4. Did you know that the prototype script was Yzma sought to create eternal night as part of a spell to give herself eternal youth? #8. “Bow down for Emperor Kuzco. Anyone else thinks that Emperor’s New Groove is the most underrated classic Disney movie?” #11. “Her likeness is inspired by her voice actress Eartha Kitt, and she’s supposed to be a younger take on her (hence the lack of purple skin).” #13. Soon you will see what Yzma’s newest potion can do… #14. “Well… maybe maybe I exaggerated the neck a bit too much but she always gave me that “infinite neck” vibe.” #18. “He may not be the most effective Disney villain, but he’s the funniest villain’s sidekick!” #25. “Fan Art of the greatest Disney villain of all time – Yzma from The Emperors New Groove.” Please share this charming collection with your loved ones!

40 Celebs Who Have Opened Up About Not Wanting Children

Talented Artist Reimagined Herself And Other Girls Into Adorable Illustrations And They Are Stunning!