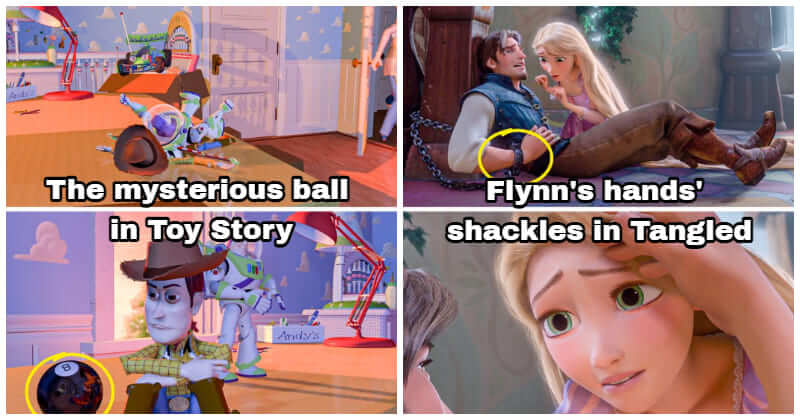 Animated films are the result of many people putting a tremendous amount of effort to produce a high-quality output. It can take years to complete a film. Even though these projects go through multiple modifications before being released, mistakes that have been hidden for a long time will eventually come to light.

Of course, even if it’s an old and famous studio like Walt Disney Studio, there are still some mistakes in the image editing process for movies. Let’s take a look at the list of obvious mistakes that even the producers have overlooked in the movies! If you’re confident that you’re a true Disney fan, how many have you noticed? Don’t forget to tell us!

#1 The mysterious ball in Toy Story There’s a scene in the first Toy Story film where Andy is out of the house. He left Buzz and Woody on his desk for a while when he went to buy some pizza. You can see that there is nothing close to Woody and that the desk is rather clean at that point. In the next image, though, a Magic 8 ball emerges next to our cowboy. When the princess waves goodbye to everyone at the end of Disney’s Cinderella, you can see that she’s wearing a long-sleeved dress. She’s supposed to be wearing the same dress on the next take, where we can see the carriage from behind, but her sleeves are shortened.

#3 The magic musicians in Lilo & Stitch If you look carefully at the back of the stage near the beginning of Disney’s film Lilo & Stitch, you can see two musicians with instruments in the dance class. However, as the camera angle adjusts so that you can see all of the dancers from the left side in the next frame, the two vanish, only to reappearance a few takes later.

#4 What are the true instruments of the musicians in Lilo & Stitch? The musicians in the backdrop of the same Lilo & Stitch scenario are once again playing for the dancing class. As you can see from the screenshot above, they both play the same instrument throughout the song. However, later in the film, there is a view that captures their gazes as they hold their instruments. Right there, you can see how one of the instruments has mysteriously transformed into a drum. When the ice monster is hunting our heroes Anna, Kristoff, and Olaf, there is an error that may be seen in this film. When Anna and Kristoff fall from the cliff, we notice that Kristoff falls under Olaf, despite the fact that he was the one who dropped first. A scene in Disney’s Wreck-it Ralph shows Vanellope practicing go-karting on the track Ralph created for her. She strikes with a pole after a while. If you recall, that was the mishap that caused her to lose a tooth. Even while you can clearly see that she lost it then and then, you can also see that the same tooth is still there throughout the rest of the video. Now, in Toy Story 2, there is a scene in which Rex is watching television.  When the TV is turned off, though, we can’t see any of them in the reflection, despite the fact that they’re right in front of it. What you see instead is the rest of the empty room. When Flynn is tied in shackles because of Gothel, we see Rapunzel approach him to talk to him in Disney’s Tangled. When he touches Rapunzel’s face, however, he no longer has the shackles on his wrists, even though they reappear in the next scene.

#9 Boo’s ability to affect the electricity in Monsters, Inc. You may recall from Monsters, Inc. that when Boo, the only human to pass the door into the monster’s realm, cries or laughs, the entire electric network goes out. When the three of them are in Mike and Sully’s apartment, this becomes much more apparent. Surprisingly, when Randall kidnaps Boo, she is bound in a chair and wailing, but the electricity appears to be working well. When the Beast scratches a portrait of himself before becoming the Beast in Disney’s animated film Beauty and the Beast, you can see his claws reach the eyes in the painting, pulling them out. However, when Belle discovers the artwork a few scenes later in the film, she notices that it has been scraped in a different way. You probably recall the scene where the Beast gets his face all messy with food when Belle has supper with him. The Beast’s face appears perfectly clean in the shot that follows after we see him covered in food as if he hadn’t eaten anything, a detail that is addressed in the following scene, where the stains reappearance.

#12 Shadow of the hands in Pocahontas When the main character accompanies Nakoma to visit John, who is imprisoned, they are holding hands before they reach the prisoner in the film Pocahontas. However, a deeper examination of that moment, as seen above, reveals that their shadows never touch hands. When Ariel is searching for items inside a sinking ship in the film The Little Mermaid, she comes across a “junk,” as she refers to forks. When they focus on the fork, it has four prongs, but when Ariel grabs it, it only has three.