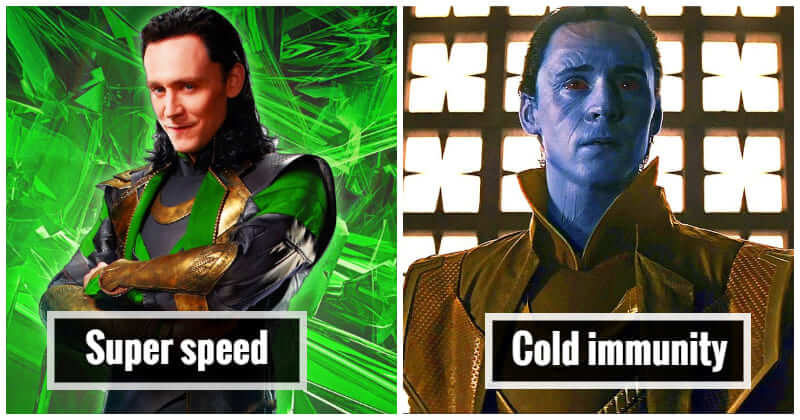 For those who are fans of the Marvel cinematic universe (MCU), it is impossible not to know the villain Loki – a powerful god played by the actor Tom Hiddleston. Bearing the name of a god, Loki certainly possesses special abilities and is even more prominent than his mighty brother – Thor.

Loki (2021), a TV series dedicated solely to Loki, has recently been released after this character received such great attention from the audience in previous Marvel movies. Loki in the TV series is a completely new version, different from the God of deception we know in the Thor and Avengers movies. But one thing is for sure, he will use the familiar powers that made Thor and the Avengers so hard to control.

The combination between the physical strength of the Frost Giant and the magic of the Asgardians makes Loki one of the most powerful characters in the MCU. Here are the powers that Loki has used in the MCU and hopefully, the audience will see more powers of this unique villain in the new series. As a descendant of the Frost Giant, Loki inherited a lot of this race’s physical strength such as super strength, endurance, and agility. One of the most distinctive features is extraordinary tolerance to cold, specifically the coldness that can turn anyone into ice instantly after a Frost Giant’s attack. Despite not being on the same level as Thor’s power or some of the other Avengers, Loki still has greater strength than an average human. He has fought hand-to-hand with the Frost Giant, the Dark Elves, Hela, and even Captain America. If he focuses on training more in combat ability, Loki can completely become an extremely formidable fighter against any enemy.

Loki is not immortal, as demonstrated in Avengers: Infinity War by his death at the hands of Thanos. However, Loki has been shown to be thousands of years old and invulnerable to any human disease.

Loki’s greatest strength lies in the magic of the Asgardians. Loki learned magic as a child and became extremely adept at creating illusions. Loki uses them in many situations with the aim of fooling or overpowering his opponents. Loki can control people by controlling their minds, one of the typical victims is Dr. Selvig. This power even had an effect on the supreme god Odin, causing him to leave Asgard and go to Earth for many years. Meanwhile, Loki ruled Asgard on behalf of his father as he had long wished. In order to become a master of deception, Loki has possessed a very unique ability in the MCU to transform into another person. Some of the characters he has transformed into are Odin, Captain America, and even faked his own death in Thor: The Dark World. In the comics, Loki can even transform into an animal similar to the original Norse Mythology. Loki only used this power explicitly once during the battle in New York. That was the moment he saw and caught the arrow moving at lightning speed just before it hit his body. To do this, Loki needs to have extremely sharp reflexes and the speed of movement of the body must also be at a level that surpasses that of ordinary people. The telepathic ability to control objects with your mind is one of the most terrible abilities in superhero movies. Loki rarely uses this ability, but when it does appear, it is horribly destructive. Loki sent out a telepathic wave that launched all of his daggers at the Frost Giants during the final battle at Thor’s head. In Thor: Raganarok, all the items in the cell were destroyed right after Loki heard that Frigga, his mother had passed away. Loki utilizes his magic to make himself invulnerable to practically all injuries, including being beheaded, as part of his great healing power. He does, however, have some innate healing abilities due to his Frost Giant physiology, which enables him to recover from injuries almost fast (like, for example, being smashed against the ground by the Hulk). This healing factor, along with his Frost Giant superhuman durability and stamina, allows him to resist almost anything the world (or the Avengers) throws at him.