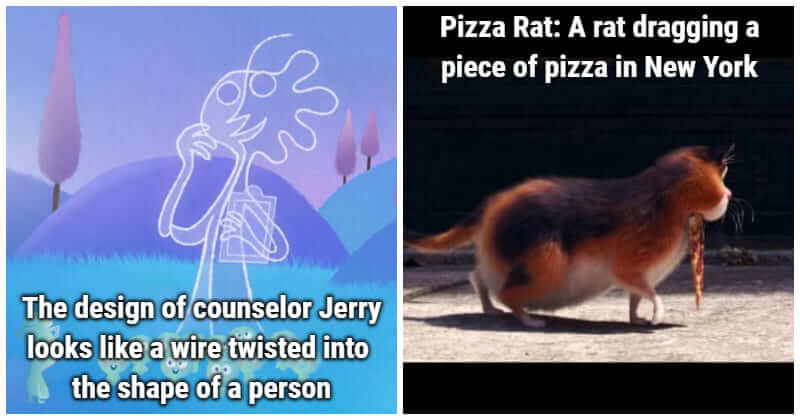 Soul is a computer-animated film developed by Pixar Animation Studios and released by Walt Disney Pictures in 2020. The movie indicates the story of  Joe Gardner – a middle school music teacher and his adventure to rejoin his spirit and body after they are unintentionally separated just before his big show as a jazz musician. Through that journey, Joe has learned more about the miracle of life and his passion for jazz.

At first glance, Pixar’s Soul appears to be just a typical Pixar movie. But if you watch more than once and have an eagle eye, your assumptions might be proven wrong. Soul is loaded with cool trivia and amazing Easter Eggs. Get ready to embark on an epic adventure to discover hidden trivia about this new Pixar movie. And maybe, by the end of this list, you will find a little bit of your soul too.

#1 The story of  Soul had been developing since January 2016 #2 While there was a little bit of improvisation, most of the lines come right from the script

#3 The design of Jerry, counselor of The Great Before, looks like you took a wire and twisted it into the shape of a person. Simple yet difficult #5 Soul has references to some well-known Pixar films, including Pizza Planet Truck in Toy Story 2 and Monsters Inc; The Adventure Spirit from Up, the Axiom from Wall-E #7 Before agreeing to Joe as a jazz musician, Jamie Foxx and the director of Soul wanted the main character to be a scientist or an actor But after all, they still agreed that Joe Gardner should be a jazz musician and not just develop jazz as a hobby, because that would be an insult to the jazz culture. The reason is much simpler than you expect: Pixar has released 22 movies in total before they released Soul, starting from Toy Story in 1995 to Onward in 2020.

#9 Return of The Pizza Rat The Pizza Rat is a viral meme on the internet in 2015: it was the picture of a rat dragging a piece of pizza in New York. That meme is referenced in a fantastic way by Soul.

Because Disney wanted the film to stay away from controversial topics like African-American culture, they didn’t want the film to be involved with the Black Culture. But Kemp Powers – Soul’s co-director has the opposite thought and fortunately, he had succeeded in persuading Disney!

#11 Dorothea Williams was also there in Onward Dorothea Williams, who is played by Angela Bassett in Soul, had a cameo appearance in Onward: her name pops up on the cover of a Vinyl Record.

#12 Soul isn’t a hyper edgy film. Its vibe is similar to that of classic movies, such as ‘It’s a Wonderful Life’

#13 The Pixar lamp has a cameo in Soul During the opening credits of all Pixar films, the iconic lamp jumps and replaces the letter “I” in Pixar. The Pixar Lamp appears in Soul as well. Luxo Junior, along with the Pixar Lamp and Logo, make a brief yet adorable cameo.

#14 This is the first time Jamie Foxx has done a Pixar Character. His daughter thinks he’s finally made it #15 Pixar has a lucky charm John Ratzenberger is an actor who has appeared in nearly every film of Pixar. Ratzenberger appears in Soul as well, although his part is uncredited. You can find his voice inside the hall of You: “We’re seeking for something different.”