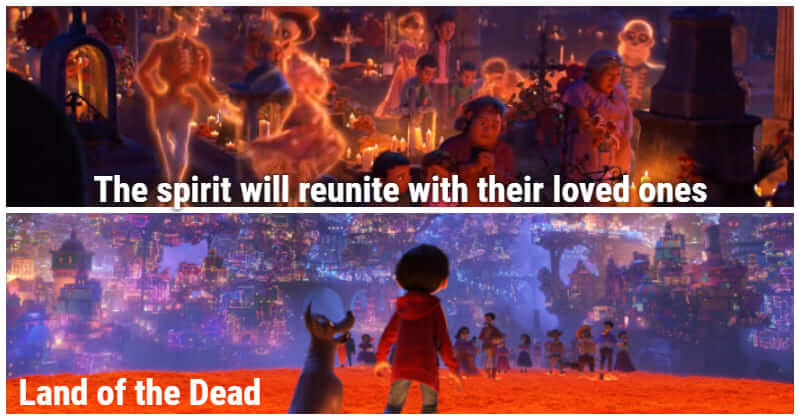 In the movie Coco, we met a 12-year-old boy Miguel who wants nothing but to become a musician like his idol Ernesto de la Cruz. However, his family banned all generations from interacting with music. Thanks to an unexpected situation, we can be along with Miguel discovering the fascinating Land of the Dead. Mentioning the Land of the Dead, the audience might imagine somewhere dark and cold, full of flying spirits and moaning sounds. So what’s the Land of the Dead? It is an underworld referred to as the final destination for spirit in Mexican folklore.

Believe me, you are not reading a creepy-pasta post. Yet, tighten your seatbelt during this journey as you’re gonna go through a colorful afterlife world with many surprises. Now let venture into the Land of the Dead to find interesting references. The Land of the Dead is a realm with complex and bizarre architecture. In its heart is a large city full of bright lights and colors. The structures in the city are buildings upon buildings of previous homes where the dead lived. The Land welcomes new members by constantly expanding to accommodate new souls that enter. The coolest thing is they have all public services like the real-life such as entertainment buildings, the bank, the train,… but the restroom.

The only real connection between the Death and the Living is bridges covered with marigold petals. Those bright orange flowers seen throughout the Land of the Dead are a symbolic part of Día de los Muertos. The locals believe in using the color and aroma of marigold to guide the spirit home during the Day of Dead. Also, the beautiful flowers are the only plants in the Land of Dead.

#3 The spirit’s Age and Status According to Mexican folklore, after a person passes away, their spirit will come to the Land and they will appear with the age as well as the status when they died. We can see in the movie, Ernesto was still a celebrity after his death. Or many of you may ask why did Coco look older than her dad – Hector. This is the reason. The only unusual things in this underworld are the appearances of humans and animals’ spirits. The human spirit appears as a moving skeleton and animals become colorful with new magical functions. Those animals even turn to a guide for those who need their help.

#5 The spirit will reunite with their loved ones The spirit will reunite with their loved ones in the afterlife, but on Día de Los Muertos, those souls can even cross over the bridges and return to the Land of the Living to see their living relatives once again. As long as these souls have a picture on their family’s ofrenda (altar), they can cross the bridge successfully.

#6 Living human enters the Land of the Dead If a human enters the Land of the Dead by disturbing or stealing something belonging to a dead person during Día de Los Muertos, they gradually turn into a spirit and remain trapped in the realm. If they can’t leave before sunrise with a marigold bless by the spirit of a family member, the realm probably has a new member. Source: Perks of Being Nath Source: Perks of Being Nath

Not every spirit can exist in the Land of the Dead. Their existence depends on the memories of living persons. In fact, the moment when the last person who remembers them dies or forgets about them is considered a “final death” for the spirit. They can fade into light and dust. However, the spirit can continue to exist as long as they are remembered by alive persons.