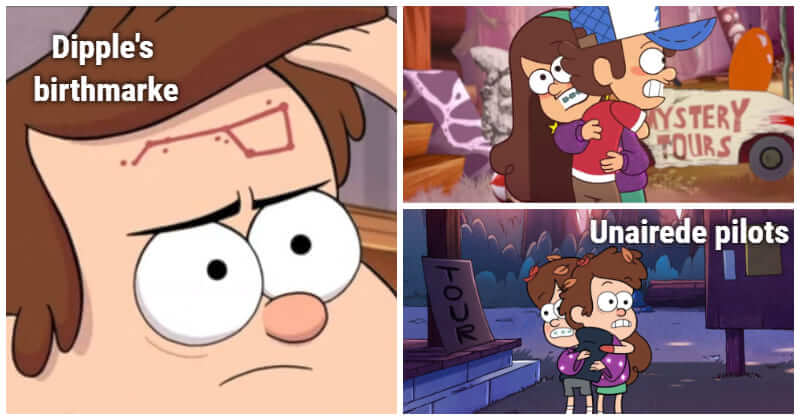 Gravity Falls – the name which is familiar with our childhood. It’s a phenomenon as you are studying or doing the washing when you hear the theme song and you immediately hold everything there to watch the movie. So you think you are a big fan and know the whole thing about Dipper, Mabel, and even the smallest details like codes?

Believe it or not, there’re a lot more facts maybe you have missed already! If you’re curious about what this is talking about, you’ll love discovering these 10 interesting facts. Even you know all of the following things, do not mind! Let’s recall our memory a bit and bring back our childhood! They are based on the model of the author himself (Alex Hircsh) with his twin sister, Ariel. Therefore, Mabel is the elder sister and Dipper is her little bro. This is a detail built based on Alex’s classmate. His friend has a lot of spots on his face which attracted his attention. Therefore he brought it on Dipper’s appearance with a fancy name “birthmark”. The old man was built based on the author’s grandpa. His grandpa has an unstable temper, kinda tough, and stubborn. So Alex brings all those features to build his character, Stan. Do you realize that Mabel has a lot of colorful sweaters?? It’s because the author’s sister loves wearing sweaters. This sounds like something magical but is actually not a mysterious code, it’s just the date of birth of Alex and his twin sister. Soos was built based on Jesus Chambrot who is “one more time” Alex’s friend in the college. As a child, Alex traveled a lot and he was enchanted with a town called Boring. Gravity Falls was inspired by the imagine of Boring town in Oregon. We almost lose our beloved voice of Dipper!!! Jason Ritter who voiced for Dipper was almost got replaced as by the time Disney picked it up, he had already committed to another show. However, that show was canceled and we got our Dipper back. And the last fact that you may have your mind blown up.

Before the right edition was aired, there was another one (the left). From the first episode of the left edition, Alex was confusing as it was not what he expected. That’s the history of our Gravity Falls edition nowadays. You can find the old one with “Gravity Falls unaired pilot” on Youtube.

It’s a pity that the show ended but I believe we all have our childhood friends from the series and a lot of laughs, memories bringing with us.

8 Iconic Movie Scenes That Were Only Made For Budget Reasons