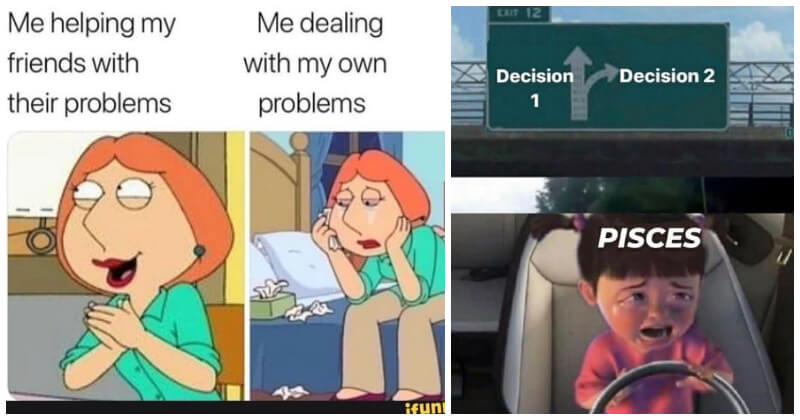 In astrology, Pisces is a mutable Water sign, which explains why he/she is more dreamy, emotional, and intuitive than other zodiac signs. Most people understand them through these personalities. However, the characteristics that we’ve just mentioned aren’t everything about Pisces. There is more to Pisceans than meets the eye.

Are Pisces people so unpredictable and hard to read? Yes, that’s true. Although you’re close to Pisceans, you can’t fully understand what’s going on in their mind. The hidden things in this zodiac sign seem to be a mystery to us. They might be something that Pisces wants others to know but don’t know how to explain.

However, it’s no big deal because we’ll reveal the things that only Pisces understands now. If you’re a Pisces, these memes certainly make you say “OMG that’s me”. If not, they will surely give you a better understanding of what’s hidden inside Pisces. Let’s scroll down!

#1 I’m artistic. Art is a passion that lives deep within me #4. Don’t try to make me believe in someone #5 All we need is reassurance #11 Overthiking…that only me can fully understand #15 No matter what happens, I won’t hurt you Why Is Pisces Hard To Fall In Love? Revealing In 15 Funny Memes

Music And Leo Are Soulmates, Showing Through 14 Funny Memes

How Sagittarius Are When They’re Sad, Showing In 15 Memes

26-Year-Old Engineer Revealed The Secret To Negotiate A Salary Of $5,000 Higher Than The Original

15 Secrets That Help To Win An Aries’s Heart

10+ Memes That Show Libra Is The Most Beautiful Zodiac Sign

Why It’s Hard To Capture An Aquarius? The Answer Is In These Memes