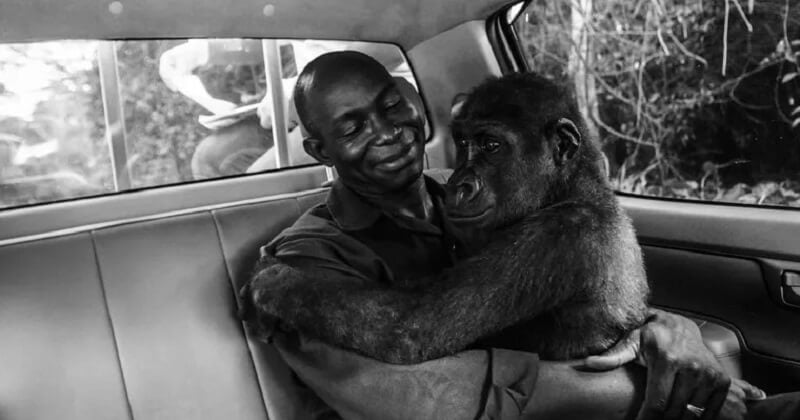 Many people think that animals are just dumb beasts, but in fact, they are smart creatures who have feelings and emotions. Just like us, they can understand and realize they are being helped. And of course, they know how to show their gratefulness to people who help or rescue them. And the gorilla in this post is a great example that will show you how affectionate and smart animals are.

Meet Pikin, a poor gorilla who was rescued by the group Ape Action Africa from being captured by hunters. She was so frightened that the rescuers had to give her sedatives to move her from one enclosure to another. When the sedatives wore off, Pikin awoke in the car. But amazingly, instead of being angry and scared, she was affectionate and calm in the arms of Appolinaire Ndohoudou, a man who joined in the rescue. He has dedicated his whole life to helping and protecting wild animals, especially gorillas in Cameroon. The tender moment between Appolinaire and the gorilla was captured by the talented photographer Jo-Anne McArthur. The captivating photo shows Pikin embracing the man after realizing that she was rescued and safe. Needless to say, the photo melted everyone’s heart, and was chosen as the People’s Choice Awards winner for Wildlife Photograph of the Year.

“I’m so thankful that this image resonated with people, and I hope it might inspire us all to care a little bit more about animals. No act of compassion towards them is ever too small,” McArthur said. “I regularly document the cruelties animals endure at our hands, but sometimes I bear witness to stories of rescue, hope and redemption. Such is the case with the story of Pikin and Appolinaire, a beautiful moment between friends.” The Natural History Museum in London hosts this photography competition every year, and officials there were also impressed by the image.

“Jo-Anne’s inspirational image is a symbol of humanity’s power to protect the world’s most vulnerable species and shape a more sustainable future for life on our planet,” said Director Sir Michael Dixon. “Photographs like Jo-Anne’s are a reminder that we can make a difference, and we all have a part to play in addressing our impact on the natural world.”

Do animals have enough self awareness to understand they are being helped? Let us know your thoughts in the comments below!

23 So-Cute Animal Friends Who Make Us Want To Hug Them Immediately!