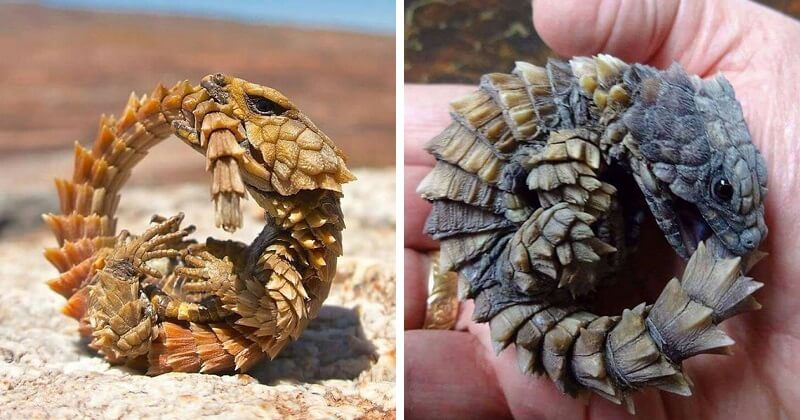 If you are a big fan of reptiles, especially lizards, we are sure that you have heard about armadillo lizards. This is a unique heavily-armored reptile native to South Africa. With its thorny exterior and unique defenses, the armadillo lizard might be both adorable and terrifying at the same time. Because of their sharp armors along their bodies, they look like a medieval fairytale dragon. Armadillo lizards have a variety of coloring, which varies from light to dark brown with a yellow underbelly with a black pattern. Their backside is completely covered in spikey armor, so when they feel threatened, they curl up and bite their tails to protect the soft belly. They can stay in a curled position for up to an hour. This defense mechanism keeps them safe from predators like snakes, big birds, and mongoose. It also allows them to spend most of their time sunbathing in the warmth of the sun. These species live on a carnivorous diet, and insects are one of their foods. They tend to live in large family groups and hide under rock crevices in South Africa’s desert to shield themselves against the harsh environment and predators. They can live up to a little over a decade and are one of the few reptile species that do not reproduce by laying eggs. These dragon-like creatures are usually three to four inches long, but some may grow as long as eight. The eye-catching looks of the armadillo lizard attracts a lot of poachers. They are somewhat easy to catch, so the creature faces a threat to its population. So please share this post with your friends to raise awareness of protecting animals. 8 Gorgeous Animals Live In Lake That Can Catch Your Eyes

10 Animals Of Vietnam You Might Hardly Find Anywhere Else