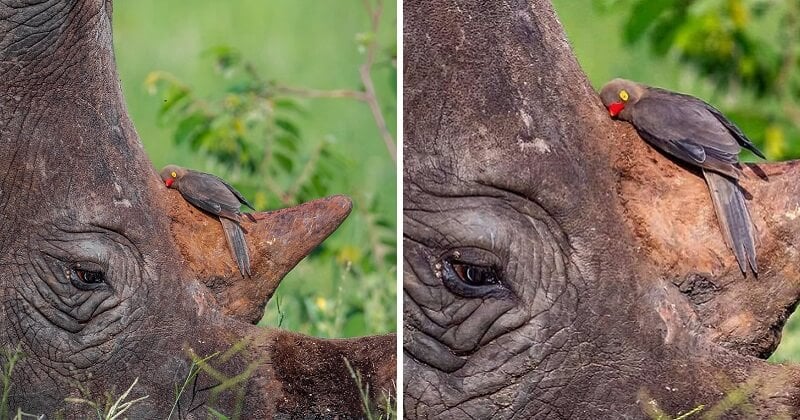 The natural world is resplendent with animals and their wonders of evolution. Not only do these animals steal our hearts with their gorgeous appearances and their unique traits, but they also confuse us with the affection they sometimes show to each other. Just like us, wild animals have emotions and feelings. In some cases, animals from different species can develop a mutually close relationship that can make us green with envy. Recently, a guide and photographer named Zaheer Ali was going on his safari trip when he spotted a sweet sight that drove him to grab his camera and capture it. A ​rhino was surrounded by little friends – a bunch of oxpeckers in the South African bush. This is not a rare sight in the Sub-Saharan African savanna as these two species live in some sort of symbiosis. However, the sweetest thing happened when Ali spotted the massive rhino and its tiny friend sharing a very tender moment. As you could see in the pic, the red-billed oxpecker gently sat on the rhino’s horn and gave his unlikely friend the sweetest hug. Ali was impressed by their friendship and decided to share it on his Instagram with the caption, “Sometimes, all you need is a Hug!” Needless to say, everyone agrees that it’s one of the loveliest scene Mother Nature has offered! The two friends just prove the world that love and friendships have no boundaries! Usually, the oxpecker and the rhinos have a symbiotic relationship. The tiny bird eats ticks and parasites out of the nostrils and other areas of the body while the rhino gets a free clean. In the Swahili dialect, the red-billed oxpecker is named “Askari wa kifaru,” which means “the rhino’s guard.” These birds also share this win-win relationship with other animals of the African savanna, such as zebra, bison or wildebeest.

Please share this awesome pic with your friends and family members to make their day!

Kitty With The Cat Tattoo Breaks The Internet In Japan

10+ Cats Who Are Struggling To Figure Out This World

Police Therapy Puppy Takes A Nap During His Swearing-In Ceremony