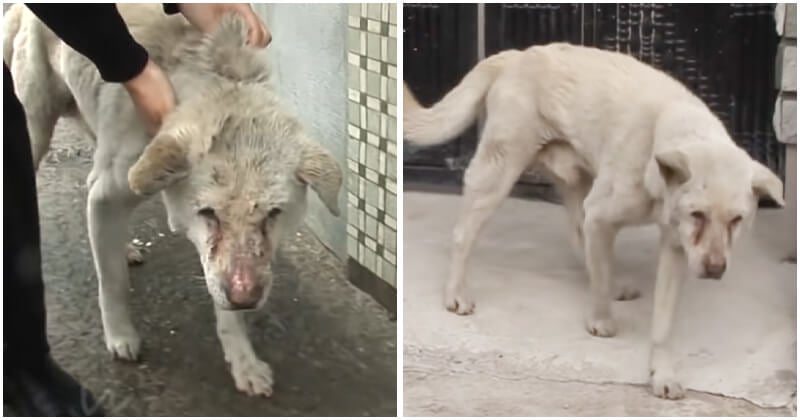 People often say that dogs are our link to paradise, but what if we arrive at paradise before our dogs? We are usually deeply upset when our beloved four-legged friends pass away, but when dogs are the ones to be left behind, they are devastated too. These pure, loyal creatures love us wholeheartedly and unconditionally. Even after we are gone for good, we still can’t be replaced in their hearts.

Jindol’s owner already left this world for two years, but the poor dog still kept mourning every day on the streets. He was raised by a kind-hearted elderly lady and they used to do everything together. Jindol spent most of his life following his Grandma. They went out for a walk daily, visited Grandma’s favorite spots and enjoyed their sweet time alongside their best friend. When Grandma got sick, Jindol showed up at Grandma’s hospital and even her family couldn’t figure out how he could be able to make his way there all alone. Jindol stayed with Grandma during the last days of her life, Jindol cried at her funeral. From that moment on, they could no longer rely on each other as they used to do before. Grandma’s departure broke the senior dog’s heart. Two years later, Jindol still found ways to sneak out each day just to find his Grandma. As his neighbors described, he became a “nomad” roaming all over the hood no matter the weather. Jindol was old and sick himself, but heavy rain or snow and even his family couldn’t stop this sad guy. Even the vet suggested that his family should let him go and fulfill his emotional needs.

“Confining him in a narrow space just because he’s old would rather amplify his psychological instability,” he said. “So for a fundamental solution, the family should understand his such temperament and be more understandable to allow him to go where he wants to be, which is far more important than the treatment.” Eventually, Grandma’s daughter-in-law (who had just quitted her job) decided to be the one to walk with Jindol in his soul journey to remember his late friend. Thanks to her sympathy, he could be able to freely walk at last, and he would never be alone on his walks again. Please share Jindol’s touching story with your loved ones!

Named After The Duchess Of Rivoli, Anna’s Hummingbird Is An Iridescent Jewel You Can Hardly Forget

What Zodiac Signs Tell About Themselves? Check Out These Memes To Know!