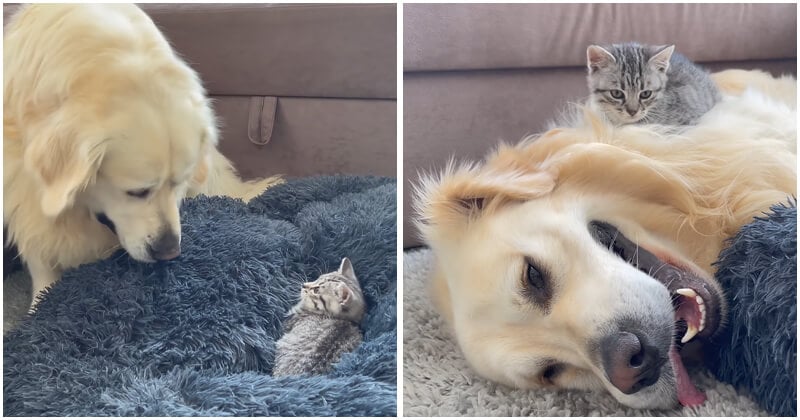 Golden Retrievers are known as the friendliest dogs in this world but they also have things that they sometimes don’t want to share with others, for example the personal belongings that they are used to and love. This cute boi was no exception. After finding out his beloved bed had been occupied by an unfamiliar kitten, he had the most adorable reaction that could melt your heart in the blink of an eye! Bailey was no stranger to cats, he even had a feline bestie named Simon right in his house (you can read their lovely story here). But when a kitten suddenly showed up at his house, lying comfortably on his bed, it wasn’t that acceptable. There was no way Baily could allow such a thing to happen! The funny dog first walked around his bed nervously, and then started moving the bed. He clearly wanted to shake the annoying thing off his property, but he was truly careful at the same time. Bailey simply did not want to hurt the kitten, isn’t it sweet?

The funny thing is, that tiny gray tabby wasn’t any afraid of the big dog either. Despite Bailey’s persistent efforts, he stubbornly lay still as if telling his opponent that he wasn’t scared at all. Such a funny duo! Since that baby kitty refused to leave at all costs, the poor doggo simply gave up after struggling for a while. He lay down to rest with the cat on the bed, admitting his failure. And then the kitten even made the dog his new bed himself. (OMG, could they be any cuter?) Watch the gentle giant and his new buddy here:

Can you guess what would happen after that fight? Well, to no one’s surprise, they quickly became friends Really close friends to be exact.

Look how loving they are now:

Please share their delightful moments with your loved ones!

Friendship Between Rescued Dog And Pig Grows Unexpectedly But Wholeheartedly