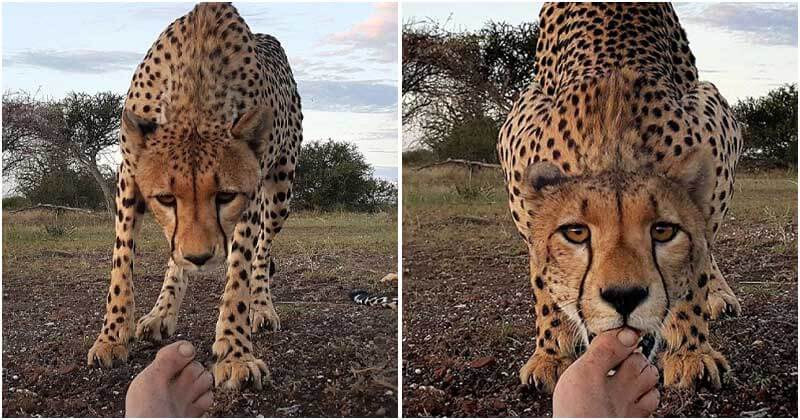 Like our children, baby wild animals are curious about their surroundings, humans and things. They try to get closer what grasps their attention and discover it. If they have a special affection for the object, they don’t hesitate to show it up. Touch it, say hello to it, or even give it a hug (or kiss). These furry creatures live with their true feelings and are masters of expressing them.

The female cheetah cub in this story is an example. The little playful animal approached a photographer, stood in front of his lens, and licked his toes.

It is somehow incredible, right? This unique scene did happen and was captured by a 57-year-old wildlife photographer named Kim Wolhuter. The cheetah’s act went beyond his expectation and got him astonished for seconds.

Kim had been filming the cheetah family in the Mashtu Game Reserve in Botswana for six weeks when the curious cub approached him. That time enabled the man to gain a level of trust of the mother and her cubs.

And the result is freaking awesome! The majestic young cat couldn’t hide her curiosity about the human staying near her family, so she decided to come in for a closer look. She even licked the man’s toes for the check.

“The mum and her cubs were close by and I had spent some time filming them. The female cub was a lot more curious than her brothers, so approached me as I was lying on the ground taking shots” Kim said.

The cheetah seemed to nibble gently but it still hurt slightly, making Kim pull his foot away.

The photographer got a close encounter to the cheetah while photographing them in the Mashtu Game Reserve. He would never forget this experience. Majestic cats can be curious and quite friendly, guys.