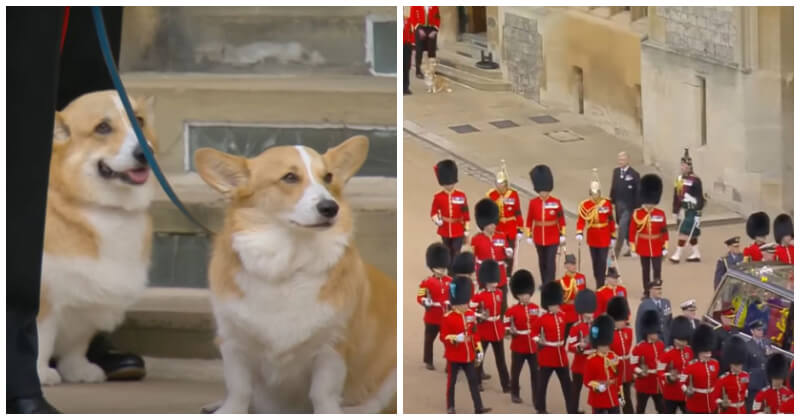 All pet parents were in turmoil when their beloved fur babies passed away, and vice versa. It’s heartbreaking to see the animals lose their usual spirit and try to figure out where their owner went. Many need a long period to accept that they can no longer see their owner’s face. It’s always hard to say goodbye, but it’s even more painful if they don’t have a chance to say the last words to each other. That’s why Her Majesty Queen Elizabeth II’s corgis were brought to her funeral procession to give her the last goodbyes. On 8 September, when the monarch breathed her last, the royal corgis, escorted by two royal aides, awaited the funeral procession in front of Windsor Castle. Her Majesty’s pony also came to honor her at the procession. The Fell pony Carltonlima Emma stood on the side of the road with handlers to greet the Queen the last time.

In 2020, the royal groom told Daily Mail that Emma had “been a wonderful servant to Her Majesty and is still going strong at the age of 24.” Though there were rumors that the dogs would be euthanized and buried with the Queen, it was untrue. Prince Andrew and his former wife Sarah, Duchess of York, who gifted one of the pups to the Queen in 2021, would take them in. The pups will live the rest of their lives with the new owners at Royal Lodge. Corgis have become a symbol of British royalty due to the well-known affinity the Queen has for them. According to the estimated documents, Queen Elizabeth II owned over 30 of them. Her first corgi was a gift from her father, King George VI when she was seven. The monarch’s corgis lived a luxurious life at Buckingham Palace. Their meals were carefully prepared by a chef and delivered by a footman. The Queen often poured the gravy on the dogs’ food by herself, and the pups would be treated with homeopathic remedies when they were sick. In 2018, Richard Kay said that the royal corgis were buried on the Queen’s estate and had their own headstone. After her last corgies died in 2012, the Queen did not intend to raise more dogs because “she didn’t want to leave any young dog behind.” Tens of thousands of people lined The Long Walk to see their beloved monarch off. When the Dean of Windsor said: “Go forth upon thy journey from this world, O Christian soul,” the Queen’s coffin was lowered into St George’s Chapel’s vault. She then will be buried next to her late husband, Prince Philip, in the King George VI Memorial Chapel. The funeral tugged at the hearts of many people who respect and appreciate the UK’s longest-serving monarch. Have you ever witnessed a pet mourning its owner’s death? How do you feel about that? Please let us know your thoughts in the comment below!

Cooperate Perfectly, Border Collie And His Owner Steal The Show With Their Amazing “Cowboy” Dance

18 Baby Animals Who Are Simply Too Cute For This World

Orphaned Baby Elephant Learns How To Hold Milk Bottle With His Trunk, And It’s Adorable

Man Spent A Fortune On His Dog’s Vet Bills, Went Back To Brother To Fire Him From Being His Dog Walker