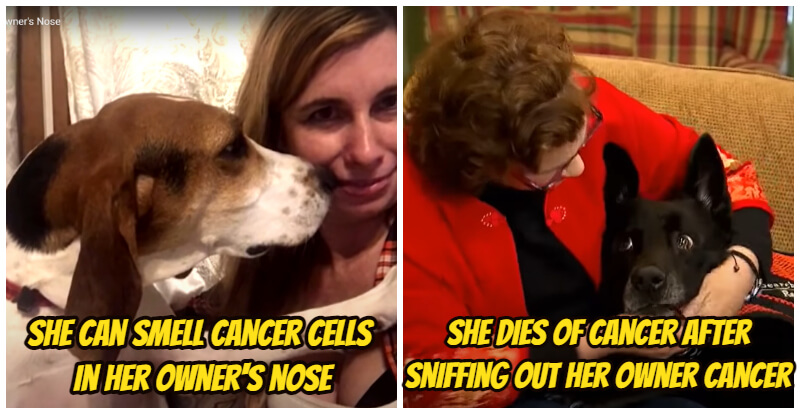 You didn’t hear wrong. These dogs can sniff cancer even before doctors did. Dogs have a fantastic sense of smell. In fact, canines have approximately 100 million sensory receptors in their nose cavity, whereas humans only have roughly six million.

Given their keen noses, it’s no surprise that dogs have been utilized for hunting, sniffing out bombs or drugs, and assisting in search and rescue activities.

These cases of 8 amazing dogs on this list were able to save their owners’ lives by accurately detecting a much more important, typically undetectable odor in their owners—cancer. And they did so long before their human companions were ever diagnosed by a healthcare professional.

1. Heidi the German Shepherd-Lab Mix: Dies of Cancer After Sniffing Out Her Owner’s Lung Cancer

Heidi, Anne Wills’ German shepherd-lab mix, operated as a search and rescue dog. It had saved thousands of lives, but Wills had no idea Heidi would also save her life.

Heidi began acting strangely each time Wills sat down in February 2015, refusing to let Wills up, scratching her arm, and panting excessively, almost as if in a panic. She then began burying her nose into Wills’ chest and taking long breaths. Wills took Heidi to the vet after suspecting anything was wrong with her canine buddy. She felt Heidi might be feeling something wrong with her when she had a clean sheet of health. But she didn’t know that her dog actually sniffed the cancer and save her life.

Wills made an appointment to see her doctor, and after being sent for a CAT scan, she was informed that she had lung cancer. She underwent surgery along with intensive chemotherapy and radiation treatments with Heidi by her side every step of the way. Sadly, Heidi passed away from cancer on December 24, 2015.

2. Troy the Doberman Pinscher: Cuddle against his owner left side, cause allergy to her skin

Diane Papazian and her husband Harry had a fox terrier before. However, Harry insisted on adding Troy, a four-month-old Doberman pinscher, to their family in 2011. She was worried because of Papazian’s allergies, but she and her husband ended up welcoming Troy into the family… a month early than intended. What Papazian didn’t realize at the time was that Troy was destined to come into her life at the exact time he did.

Troy continued to cuddle against Papazian’s left side while resting in bed with the pair, causing an allergic reaction to her skin. As Papazian scratched, she felt a lump in her left breast.

Papazian had undergone a routine mammogram six months prior, and the results were normal, but after feeling the mass, she got in touch with her doctor. That lump turned out to be stage 2 breast cancer. Papazian had a double mastectomy, started chemotherapy treatments, and was later deemed cancer free, all thanks to their new pup.

Stephanie Herfel took in her son’s nine-month-old Siberian husky puppy, Sierra, after he went for the Air Force in 2011. Herfel had no idea what a gift Sierra would be.

Sierra began sniffing and putting her nose on Herfel’s abdomen one day in 2013. Herfel initially imagined that the dog had detected food spilled on her clothing. Sierra, on the other hand, was startled enough to curl up into a ball and hide in the closet.

While Herfel had previously experienced pain in her abdomen, she was advised by an ER physician that she had an ovarian cyst and was sent home with pain medication. Given Sierra’s reaction, Herfel made an appointment with her gynecologist. On November 11, 2013, her doctor confirmed that she had stage 3 ovarian cancer.

Lauren Gauthier founded Magic’s Mission Beagle and Hound Rescue in Buffalo, New York, an animal rescue organization that rescues dogs from abusive and neglectful environments. Victoria, a treeing walker coonhound with an infected eye who had been surrendered by a hunter, was taken in by Gauthier in 2017. Gauthier had no idea that she was not only saving Victoria, but that Victoria would also save her.

In the spring of 2017, Victoria began staring at Gauthier’s face and putting her nose directly on an area that Gauthier had assumed was simply a pimple or blemish. Victoria would repeatedly touch Gauthier’s nose, look at her, and then smell the area again. When Victoria’s behavior persisted, Gauthier decided to see a doctor.

Gauthier had a biopsy, revealing that the “dot” on her face was actually a basal cell carcinoma. However, thanks to Victoria’s heightened senses and persistence with her owner, Gauthier was able to catch the skin cancer in the early stages and undergo surgery to have it removed. 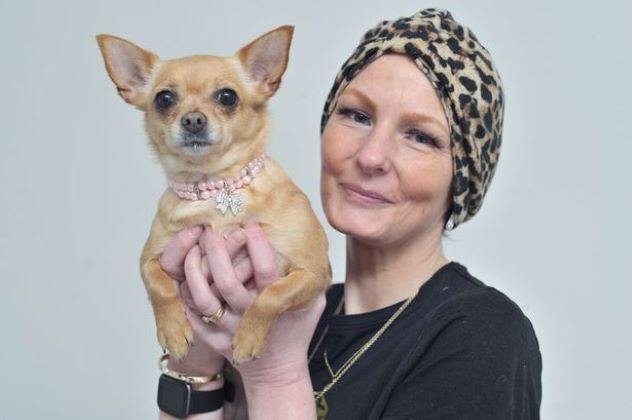 Robison immediately made an appointment with her doctor, but it was uncertain what the mass was. Robison was then referred to several different hospitals before being diagnosed with stage 3 low-grade serous carcinoma, a rare form of ovarian cancer, in January 2021.

In March 2021, Robison underwent a 12-hour surgery in which a full hysterectomy was done. However, during the operation, doctors also discovered that cancer had spread to Robison’s bowels. Between the surgery and regular chemotherapy treatments, Robinson is now on the road to recovery.

6. Bessie the Cairn Terrier: Attentively monitor his owner’s every move

Bessie, a Cairn terrier, was saved by Ron Wain and his girlfriend from Newhall, Yorkshire, when she was just 10 months old. However, after 12 years with the couple, Bessie began acting strangely, including as attentively monitoring Wain’s every move, following him about, and resting on his chest.

Wain began making more trips to the restroom than usual around the same time Bessie began acting suspiciously. He decided to bring Bessie’s strange behavior and increased restroom visits to the notice of his doctor. Wain was then told he had bladder cancer.

7. Buster the Jack Russell Terrier: Rested his head and prod on owner’s chest

Mike Wagner of Deering, New Hampshire, was laying in bed without a shirt in the spring of 2014 when his Jack Russell terrier, Buster, rested his head on Wagner’s chest and began prodding him. Wagner suddenly became aware of a lump on his chest.

Wagner ignored the lump and went back to work as a logger for the following few months. However, he began to realize that whenever he moved his arm while working and pulling wood, he felt a strange sensation in his chest.

Wagner then scheduled an appointment to be examined. He was referred to a breast cancer center, where he underwent a biopsy and was diagnosed with breast cancer. Wagner had surgery to remove the cancer, but the doctor discovered it had spread to his lymph nodes during the treatment. Wagner then had five months of chemotherapy and six months of radiation in an attempt to cleanse his body of cancer. On October 2, 2015, he received his final treatment.

8. Broady the Newfoundland: Sniff and nuzzle her owner’s armpit strangely

Lucy Gies, 45, of Didcot, Oxfordshire, acquired Broady Newfoundland in July 2021 when his former family could no longer care for him. Unbeknownst to Giles, the “gentle giant” would turn out to be a greater blessing than she could have imagined.

Broady began acting strangely by September 2021, and every time Giles sat down, he would sniff and nuzzle her right armpit. Giles initially felt Broady simply desired more attention. However, as Giles was taking a shower one morning, she decided to perform a breast exam. She felt a bump in her right armpit at that point.

Giles’ doctor thought the lump was hormonal, but after weeks passed with no change, he was admitted to the hospital for tests. He was diagnosed with HER-2 positive breast cancer and had cancer cells found in her lymph nodes. Giles began six rounds of chemotherapy in October 2021, followed by a lumpectomy and radiation treatment. He is now undergoing chemotherapy.

What do you think about those amazing dogs sniff cancer? We’d absolutely love to hear what you love about the job the most. Visit the comment section and share the most adorable experiences with your name on it.

Aubtu.biz is a website that provides you with entertainment updates and creative ideas to brighten your day. Don’t hesitate to visit our site to know more about updated animal pictures and news.