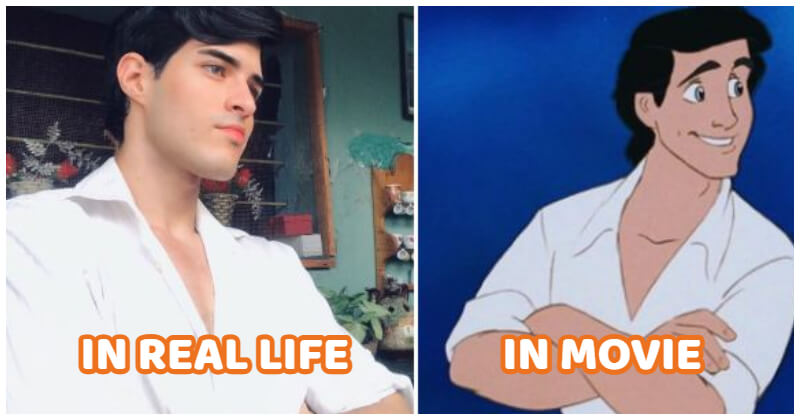 In the past, witnessing a doppelganger was thought to be a sign of bad luck or tragedy. Nowadays, it is a very common phenomenon when you meet someone who resembles someone you knew before, or they have physical features like eyes, nose, style of dress and hairstyle. Moreover, it can be an amazing experience when you look like some famous actress or real Disney character!

On Twitter, people have been spreading pictures of the second version of Disney characters. And when looking at these collaged photos, we exclaim “It’s amazing”. Those photos caught the attention of the Twitter community, and they went viral! Keep scrolling down and let us know if you notice any similarities between these people and the Disney characters. And you, test yourself to see which character’s doppelganger you are?

#1 Prince Eric from “The Little Mermaid” Louis Leiva is a carbon copy of Prince Eric from “The Little Mermaid.” And he said that he loves being told to look like the prince who captured Ariel’s heart. “Who wouldn’t like to be a prince or look like one, even if it’s just from a fairy tale?” he said. “I feel honored. He has always been one of my favorite Disney characters.” This man totally deserves to be in the live action! Merida is the first Pixar character to become a Disney princess. She may reside in medieval Scotland, but did you know that she has a twin in Williamsburg, Ohio? Thanks in part to her flowing red curls, Hannah Wiederhold looks just like Merida from “Brave.” Many people on the thread had Disney doppelgängers, including @sahxra_ — who shared a photo of herself alongside Princess Jasmine. I don’t know how they overlooked this girl for the Aladdin live-action movie! She’s so beautiful. OMG!  Scotty Jacobson is the spitting image of Milo Thatch, the protagonist of  “Atlantis: The Lost Empire.” This guy told that he “definitely relates” to Milo’s style. “I love the time period the film is set in, as well as when he becomes a part of the world Atlantis and dresses in their attire,” Jacobson said. “Especially the crystal necklace part. I wear a crystal necklace every day!”

#5 Holly from “The Polar Express” Sometimes finding your cartoon doppelgänger is all about the smile, as quenblackwell proved. Take a look at the two pictures, they are almost no different!

#6 Harrow from “The Dragon Prince” Afi said “When I first saw the trend on Twitter, I thought it would be difficult to find a character who was Black and had dreads and a beard… Harrow is literally one of the only animated characters who look like me.” If he dressed up as Harrow, he could totally transform into the King of Katolis, right? Lleyah F. Waller is proof that you don’t need a special suit to turn into animation characters! With just her big natural hair, she looks like many famous characters like Anne Boonchuy from “Amphibia”, Gratuity “Tip” Tucci from “Home”, and Missy from “Big Mouth”. It’s so amazing!

#8 Jack Frost from “Rise of the Guardians” This man and Jack Frost are difficult to distinguish since they both have the same frosted hair. Rob could be twins with Jack Frost, one of the major characters in the 2012 DreamWorks movie “Rise of the Guardians.”

What Disney Princesses Would Look Like If They Were Anime And Dressed Up Kimonos?