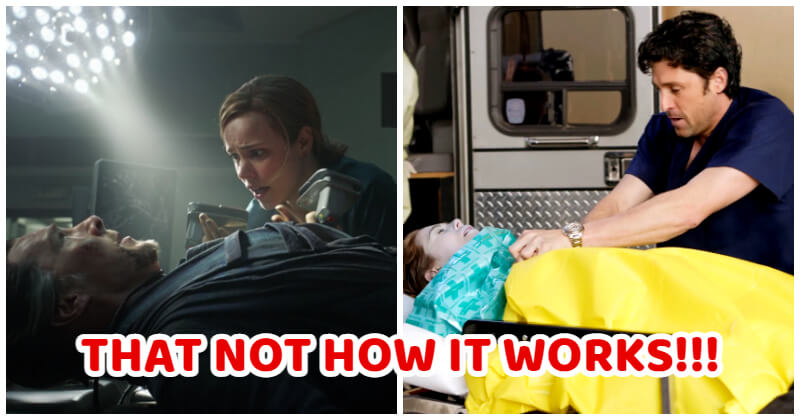 So many people believe the things they see in movies and TV shows when most of the time these are just exaggerations. These myths can be partly true, or completely inaccurate. But they can get dangerous, especially if they’re medical myths. CPR sure doesn’t seem to be that magical in real life and the way people in films just tilt their heads back when they have a nosebleed can lead to major problems.

So let’s put aside the dramas and entertainment that Hollywood dubbed “medical procedures” and see what is really going on behind the hospital walls. How many of these myths have fooled you?

1. Doctors Who Can Do Everything In a movie every time a patient is rushed into the emergency room, a doctor will be called to attend to them, no matter what their profession is. In real life, no doctor can do everything. As good as they can be, they’re specialists and still need to rely on the skills of others just like in any other profession.

“For example, you have non-surgeons performing surgery, surgeons managing conditions that cardiologists would be managing, and the like,” explained Dr. Adalja. Another thing that is absolutely ridiculous in movies is how fast a doctor can give a diagnosis. In reality, a single doctor will rarely be able to pinpoint the problem at a glance after some tests or just a glance. Hollywood loves violence. They love fighting scenes and characters having nosebleeds after some intense punches. These guys usually lean back and pinch the bridge of the nose to stop the bleeding, as many of us do when we have a nosebleed in real life. But this is the wrong way to stop your nose from bleeding as it can increase your risk of choking. The blood can also go into the stomach and create discomfort as the stomach is not designed to process our own blood.

So no leaning back. Just sit still and pinch the muscle part of the nose (below the bridge) until the bleeding stops.

4. Real Doctors Don’t Use A Defibrillator When The Patient’s Heart Has Stopped Doctors on-screen use defibrillators to revive patients when their hearts have already stopped. In real life, there is no way a defibrillator can make a flatlined heart beat again, no matter how hard you try. Once your heart has stopped, there is no electrical activity in it to “reset” into a normal heart rhythm. The only way to bring a flatlined patient back is to inject drugs into the heart. 99% of the time when you see somebody performing CPR on screen, they’re doing it wrong. Real-life CPR isn’t pretty. You need to check for a pulse first, not after doing some chest compressions. CPR is quick, vigorous, and brutal. It can crack open the patient’s ribs from pressure.

And just like with the defibrillators, CPR can’t revive a patient when their heart already flatlined. “The point of it is to keep blood flowing to the brain until blood circulation and breathing can be restored at the hospital. Many times this miracle worker is a temporary fix and once the CPR stops, the patient is back on death’s door,” shared Dr. Topgi. Often when a character gets stabbed with a knife or hit by an arrow, they just painfully pull it out and wrap bandages around their wounds like no big deal. In real life, if you do that, chances are you’re gonna lie in a puddle of your own blood. You need to do the opposite of pulling whatever hit you out. By keeping the knife in, you’re plugging your wound and preventing blood from gushing out. Seriously! Trying to suck the venom out from the wound of your partner is the dumbest thing ever. Try that and the next thing you know, you’ll be rolling in pain with your partner too. You’re not helping your friend, you’re just getting yourself poisoned. Most of the time when a character wakes up from their coma, they gonna jump straight into the action. In reality, people who have comas probably have brain damage. they would need months of rehab before they can come back to their old life.

9. And So Does Amnesia Real Amnesia rarely erases everything in your brain like what is in the movies. A person with amnesia does not completely forget everything that ever happened to them. They forget bits and pieces of certain memories. Complete wipe-out amnesia like in the movie can only happen when the accident is serious and causes a loss of physical control and intelligence.

Apologize To Lisa: All About The Scandal That Caused Lisa A Huge Backlash

10 Actors Who Almost Worked For Free For Their Iconic Roles